Get comfortable and grab a drink, this is going to be long...

I recently posted about my Cardboard Roots but now with Gellman’s invitation I can go a little farther. I am defiantly a team collector but it took me a long time to get there. I started collecting in 1987. I collected only football at first. I tried to build complete sets. But there was only one grocery store in town that sold cards and once football season was over they didn’t carry football cards only baseball. So naturally I started buying baseball cards also. Soon after the explosion of baseball cards in the early 90’s we got a baseball card store in my town, The Sportscenter. Once that opened I was exposed to lots more cards. I didn’t have to rely on just pulling cards out of packs anymore and started to focus on specific things I liked. I went back to mostly all football and only dabbling into baseball.

I collected Dan Marino and put together sets. The last complete set I ever built was 96 Certified Football. It cost a fortune in wax. (I still have an Artist’s Proof Eric Moulds in it because I never could get a plain one) Who am I kidding, I was/am a hoarder. I had/have card, coin, comic, and toy collections. I was single and lived with my grandparents so I had a ton of disposable income. It was nothing to spend 50-75% of my paycheck on hobbies. In the mid 90s the high dollar inserts started showing up and I started busting just for inserts. Lots of times I would bust boxes pull the Marino’s, Inserts, and RCs only to leave the base cards on the counter. I spent hours in the card shop. It was run by a guy named Tom and his mom (Hassel- Granny). He sold cards and she sold sports clothing (team clothing, hats, coats, etc..). Eventually I started working behind the counter. I say working but I wasn’t getting paid. I worked overnights and would get off work at 6:00AM, go home sleep till noon get up and go to the card shop. (I was young and didn't need sleep) Granny started having heart trouble and couldn’t work for a while, so Tom starting running things on his own. About the time I got there at noon Tom would be ready to go to lunch so I would watch things while he was gone. Like I said I didn’t get paid but I did get a few perks. I got first dibs on anything he bought. If he bought out a collection and I would strip out what I wanted before anyone else got to see it. He also gave me cards for whatever he had in them. Also I got to trade with other people in the shop itself. If someone busted a pack with something in it I wanted I could trade for it or buy it. He didn’t like for anyone to do that. He paid the rent so he was the only one that was going to make money in the store. The store is shut down now, cards just couldn't pay the bills for him any more. Tom is a landscapper now and I see him every couple days in the summer mowing lawns. Man I miss that store. I bet he does too.

My favorite thing to do was play high card. If anyone out there doesn’t know what that, here is how it works. You get some people together to play (doesn’t matter how many) and everyone buys a pack and busts it. The person with the card that booked highest gets all of the cards from all of the packs. It wasn’t always the high card. Sometimes we played with stats. Whoever got the card with the highest career home run, tackles, rebounds whatever on the back won. Whoever won got to pick how the next hand was played. I always did best in tackles. I guess I was good at pulling worthless defensive players. Sometimes we would go high stakes. The best stats got the cards the low stats bought all of the packs for every player. It got expensive if you lost. As long as you won or pulled marginal players you were out no money. One time Tom got a box of 86-87 fleer basketball for us to play with at like $36 per pack. Four of us played. If you lost it cost you $144 and you didn’t get one card. Not one of us pulled a Jordan. It is probably a good thing to. I know I would have been sick if I would have pulled a Jordan and had to give it up and pay $144 buck just because nobody in the pack could rebound. Good Times!!!

Eventually I got a girlfriend that ended up being more expensive than collecting. We had a kid so all my cards went in the closet and I bought a house. Six years went by before I bought any more cards. One day the cards in the checkout line at Wal-Mart were too tempting and I bought a pack of baseball cards. By this time Marino was long retired and my red Sox had just won the Series so I bought baseball instead of football. Wouldn’t you know it I pulled a jersey card, first pack. Now when I quit collecting in 99 a jersey card was rare, really rare. Look at a 99 Upper Deck Marino jersey card compared to any other Marino jersey card. I had no idea that in the 6 years away from the hobby that jersey cards became the same as a normal insert. I know now they are not what they used to be but I was already sucked back in. Now that most of my income is spent before it gets deposited I have to be more selective in my collecting. It is hard to be a player collector if the only place you have to buy cards is retail packs (It would be Youkilis if I did it). So I decided to collect a team. Naturally I choose my favorite Red Sox. After a few years of insanely busting retail packs for 100% of my cards I came across blogging and started trading. A month ago I started my own blog Thoughts and Sox. So know I am trading off all of my other cards for Red Sox.

I'm trying ot put pictures in here but Blogger isn't cooperating. I don't think it likes those 11MP pics because it keeps erroring out. I'm going to post this now to meet Gellman's midnight deadline and add them later when my blood pressure is a little lower. So if you are reading this check back in to see the pics of how I store my cards. I feel like the guy from my scanner post. Stress releived, the pictures are upoaded now.

Much to my wife's dismay my collection has taken over our hall closet. I keep my Topps Red Sox in binders and everything else gets boxed. 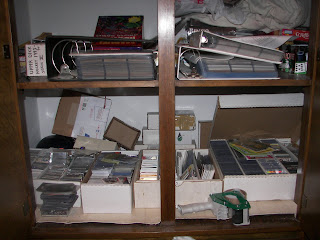 I only put them in the binder when they are complete or close to a complete team set. Basicaly if it is on my want list it is in a binder. I have one for vintage and one for modern. 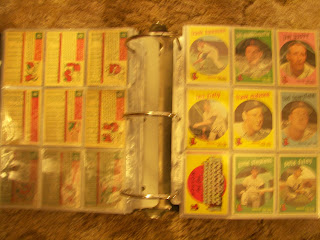 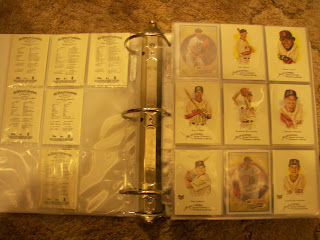 The monster on the left is trade bait. The Shoebox is Red Sox too expensive for a binder. 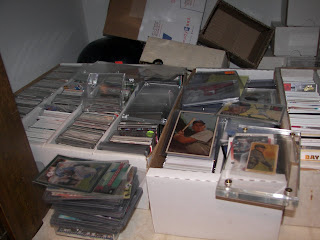 In the picture below the monster box on the left is trade items that haved a destination. I am either trying to aquire enough of to ship off or are waiting to ship because I am to lazy to go to the Post Office. The monster on the right is my Marino cards and football RCs. The stuff in the back is assorted Red Sox cards. 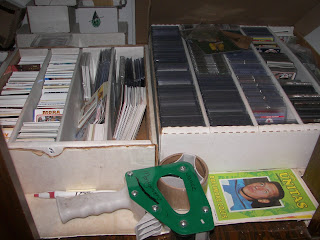 I also have a boxing only binder. 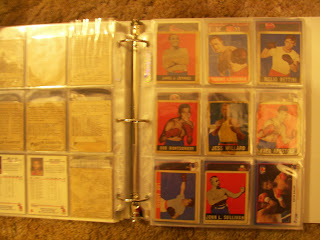 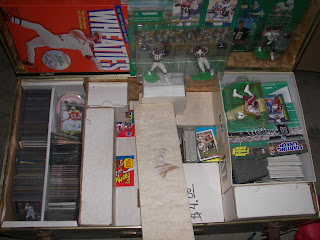 See I told you that was going to be long. I hope you enjoyed it.
Posted by AdamE at 11:30 PM