Two post in one week! Blogger may melt down due to this flurry of activity from me. But I am starved for Red Sox now that the season is over. From reading other blogs I seem to be just the opposite of everyone else because I tend to buy more cards after the season is over than during it. I have to get a Sox fix somehow…

Catcher – It is a no brainer who is going to catch next year. Martinez will catch almost every game and rightfully so. The big question here is Varitek. His contract has a two-way option. The team can option him back for a year at 5 Million or he can option himself back at 3 million. I can’t see any way that Theo takes him back at 5 Million. I really don’t see Tek getting 3 million anywhere else so I think it will boil down to how much he wants to play. Take the 3 million to sit on the bench or sign for less to start somewhere else. Personally I hope he retires and they put him in as the bullpen coach.

1st Base – Our first baseman is awesome, great hitter and Gold Glover. I really expected a MVP type of season out of him this year. Unless the Sox trade for Adrian Gonzalez I see him staying at first and moving to 3rd when Lowell needs a break. Why mess with a good thing.

2nd – Pedrioa didn’t have the MVP season of a year ago but no complaints about him either. He is defiantly on of the elite 2nd baseman in baseball.

Shortstop – No matter what we do I am betting that Theo gets it wrong. I would be happy to stick with Alex Gonzalez. He has a great glove and actually hit pretty good this year. I have absolutely no faith in Jed Lowrie. He doesn’t seem durable enough to last a whole season. He looks like a backup to me. There are some Free Agent and trade options out there. Tejada is available. He may be a little pricey but he can hit better than any other free agent SS. Would he take a pay cut to make a run at a title?? If Seattle doesn’t pick up his option I wouldn’t mind seeing Jack Wilson here either. He has sick defense. I’m not into fielding stats but just from watching him I know he is a bad ass in the field. Then there is a rumor that we may get Hanley Ramirez back in a trade. I would love it but it won’t happen.

3rd – I really like Lowell. He is an old school, down and dirty player. Problem is he isn’t only old school he is old. (for a ballplayer) A-Rod had the same injury that Lowell had and he only took off the beginning of the season and never had another problem. Mike limped around on it all year and took tons of days off. This is another glaring hole with not much out there to fill it. Maybe Youkilis should move over from 1st and we just replace the first baseman. Because outside of Blalock and Tejada…

Next up will be the pitching staff.
Posted by AdamE at 7:40 AM 1 comment:

Well this is it.

The end of the season for the Sox.

I figure a few people opened this expecting the end of the blog. I'm not quiting I just don't usually have enough ambition to post anything. OK, back to the Sox...

Only way the season could have ended in more disappointment is if we wouldn't have made the playoffs at all. I never would have guessed that we would get swept by the Angels. One good thing about the Red Sox is that I know there is no such thing as rebuilding, only reloading. So lets take a look at what bullets need replaced. Most would start with the infield but our most glaring question mark is in the outfield so I am starting there:

Left Fielder - This is the most obvious question this off-season, will Theo resign Bay? He seems to fit in great and put up a great OPS but had a sub par avg for an outfielder on this team. There are a few free agents out there that may be just as good a fit. The most obvious one is Abreau. I wouldn't mind seeing him in LF for a few years. He has a great bat moderate speed and although is fielding is less than stellar it isn't really that bad. Holliday is another option. I'm not sure who is better though Bay or Holliday, almost a toss up to me. But Holliday is represented by Boras so... The dark horses could be Matsui or Vlad. Both are horrific outfielders but could cover the ground in front of the monster no problem. One last option, how about Damon? He isn't the player he once was but he isn't bad either. His girly arm wouldn't be so obvious in our left field either.

Right field - Has there ever been a more boring player in baseball than JD? He does get on base though. I don't think he is worth that huge contract but he is what he is. He does have a great arm though.

Backups - I don't want Baldelli. Why have a backup that can't ever play? I doubt Gathright stays around either. I like his speed (I bet he is faster than Jacoby) but the guy can't hit, period.

That is it for now. I'll knock out the infield sometime before spring training. Yes it is that hard to make myself post something now-a-days...
Posted by AdamE at 4:47 PM 3 comments:

The playoffs are not going very well, so I am rewinding to a month ago when the Red Sox could score more than one run in two games. That is right it is overdue trade post time.

Over a month ago I made a trade with A Giant Blog. I sent him some 1960 Topps Giants and he sent me some much needed 1961 Topps. 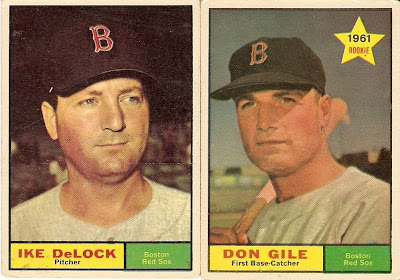 I like the 1961 Topps but I don't. I like the design, white border yellow highlighted red letters, and the colored team name background. (although I don't understand the color selection) I like all that stuff but the posed pictures,not so much. It is kind of letdown after what I consider the best Topps design of all time. Regardless of all that I have to have them all and there are getting close to 50 years old. I'm always happy to get 50 year old cards. 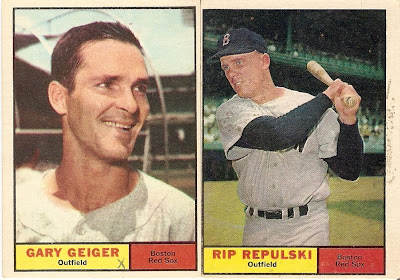 See these team name backgrounds make sense, red for Red Sox. The green above - no sense at all. This isn't all that I got in the trade, I also got a handful of newer stuff.
Thanks for the trade...
Posted by AdamE at 10:20 AM 6 comments: