This is the roots of Thoughts and Sox. I'm posting today the cards that got me into the hobby.

It is nothing special and it has got pretty beat up in the last twenty some years (I didn't know anything about protecting cards as a kid), but this is my first ever ball card. I'm not quite sure where I got it, actually I think I found it somewhere. (Those are not really creases they are personality marks) 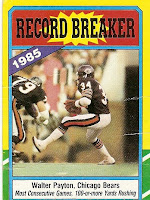 It is a 1986 Topps Record Breaker #7 Walter Payton. As a kid Walter Payton was my favorite football player. I loved watching him run back then. I even named my oldest son Payton after him.

Next up is the beginning of my Red Sox collection. After I got that Walter Payton card I started collecting football and my brother started collecting baseball cards. In 1988 I moved to Missouri and there was nowhere here to buy football cards so I bought some baseball. Now-a-days if I buy ca box of cards and get doubles I feel cheated. the card companies are a load better than they used to be about this because back in, 19888 I bought a box of Topps and got 13 of these:

Pretty soon a grocery store started carrying football cards in my town and I switched back to collecting football but my favorite baseball team continued to be Boston. I collected football cards till 1998 (i have a ton of football to trade, e-mail me if you have some football needs) when it got to expensive to buy cards and chase women. When I got the itch to buy some cards again I started buying baseball instead of football. It was the Heritage sets that drug me back into the hobby. I accidentally came across this Boston blog (Touching All The Bases) with it's random card of the day and some links to a few baseball card blogs. After reading blogs for a few weeks and making a few trades I jumped in headfirst with Thoughts and Sox.
Posted by AdamE at 10:53 PM