State Of The Blog

If I actually had any regular readers they would have noticed that I'm not really posting that much anymore. It isn't for lack of collecting interest and it isn’t cause I don’t appreciate every card all you wonderful traders have sent me either. Call it life. The last year has been a world wind for me. I’m the type of person that doesn’t seek out change and that is all I have seen lately. A year ago I had worked at the same place for 15 years, drove the same vehicle for 13 years, and lived in the same place for 20 years. After all those constancies I’m now on my 3rd job in a year, 3rd vehicle in a year, 3rd move in a year and my wife has started her own business; throw in expecting a new baby this summer and that world wind turns into a hurricane of change. I still love my Red Sox, Steelers and cards though, that has remained constant, it is just that this perfect storm has life turned upside down. This equals no time or interest in blogging. Every now and then the urge hits me though so I won’t totally quit blogging but don’t expect it too often so I don’t see myself making dayf’s Tops of the Pops list anytime soon. Dayf – get your head out of that pony’s ass Flushing and add Dime Boxes to the Top list already, in a short time Nick has etched out a spot as one of the best card blogs out there. Now before I tick anyone else off here is the state of the blog:
• Blogging is on the back burner.

• Not blogging but still trading. If you have some Red Sox that need a good home I’ll be your huckleberry.  I really need to get to Tombstone, I'm only a few hours away.

• I meet in person with two other bloggers in the last week. 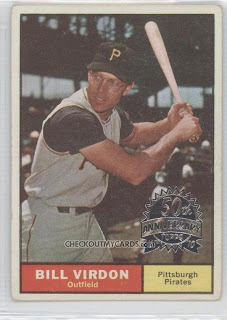 • I made a major Player Collection addition. I found a 2010 Topps Heritage 1961 Buyback Bill Virdon and scooped it up for $10 off of COMC. I don’t know what the print run is on the buyback cards but I had never seen a Virdon before. I have located another one on Beckett’s trade site but I am having trouble getting in touch with the owner. Has anyone ever used Beckett as a trading platform and does anyone have an e-mail for wickercat, I think his real name is Brandon Hicks?
• That 3rd move I mentioned earlier is happening this weekend so if you have my address on file, throw it away.
• As much as I hated to see Tito go Valentine has impressed me so far. Consider me happy with the manager choice until further notice.

• Ellsbury, Gonzalez, and Youkilis are going to be in the top 10 MVP voting; you heard it here first.
• Hines – It was sad to see you go but really it was time. I hope to see your smile on the Steelers sidelines again one day as the Wide Receiver Coach.
·         I shipped out cards for Scott, Nick, Matt, and Dustin this week so I don’t owe anyone cards at the moment; at least I don’t think so.  If you are not one of those guys and I owe you cards please let me know.
• 2012 Topps isn’t as bad as everyone has made it out to be. If you don’t believe me get out your 2004-2008 Topps cards and compare. We are all spoiled from 2009-2011.
• I’m going to hit about 10 D-Back games this year. They have moved up to 3rd on my favorite team list. I guess it is kind of expected though since they are the only show in town.
• 11 thoughts is more than I have given in 6 months did you really think I was going to give you an twelfth?
Random Red Sox Card
Posted by AdamE at 11:30 AM 6 comments: