Refractors and Gold Cards for trade

I picked up some refractors and gold cards from mynew LCS.  If you would like to trade for any of these please leave a comment. My wantlist is right here. 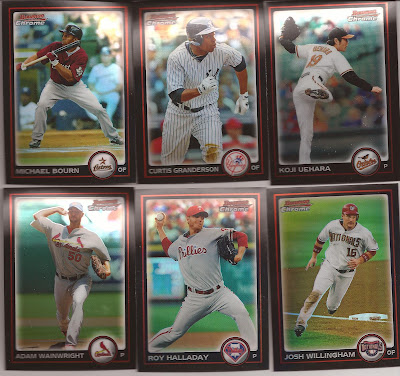 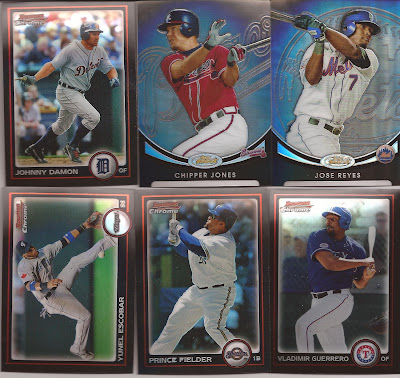 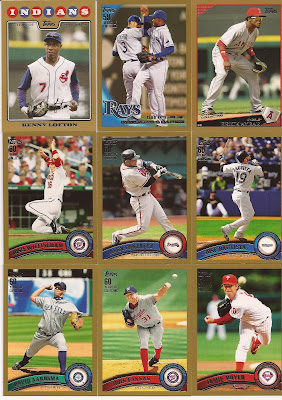 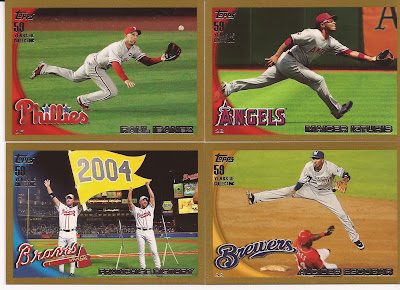 Two of my many Fantasy Teams are drafted and I have to say I am very happy with both of them.  I'm going to share them both here cause I have nothing else to talk about and you are here anyway so you may as well read on.  (I'll start some card blogging once the scanner is out of storage)

My first draft of the year was The Wacked Conference but together by Gellman over at SCU.  I ended up with the last pick which was new to me.  Usually I end up somewhere in the very middle to 3rd from last.  Two picks in a row was kind of cool but it sure made it a long time till my next pick.  I checked the scoring and setting before hand and found out that you get 4 points for a HR in the league and AVG wasn't considered a stat; so I went all out on guys that go deep.  Cabrerra dropped all the way down to me so I grabbed him first followed by Carlos Gonzalez.  Sticking to mashers I passed on some big name pitchers and grabbed Matt Holliday and my favorite Youkilis.  I don't really remember what order I took guys after that but here is what I ended up with:

I'm a little lot closer heavy but saves are worth 4 points in this league and I figured one guy can get up to 40 saves in a year which is a lot more wins than a started can.  I have depth everywhere but SS and C but I have plenty of guys who should be good trade chips.

The second league draft was the one of league I won last year, Card Bloggers Unite.  It was a keeper league.  Each team kept  guys from the previous year.  My 5 were:

I had a tough time deciding on those last guys.  I had to cut Pence, Phillips, and Joakim Soria to keep this 5.  But I got lucky in the draft and get them all back.  Here is what I ended up with:

Again lots of hitting depth, some of my favorite players, and some strong closers.  The last two picks probably seem odd but this league has HLDs so got to have some middle relievers.  I don't think I could have done much better here.

Barring catastrophic injuries I should be a lock for the playoffs with both of these teams.
Posted by AdamE at 9:26 PM 2 comments:

Today I received an email from Topps stating that my MCG cards shipped today.  So barring a USPS fiasco I should have them in hand soon.  I placed my order on Feb 15, so a little over a month.  Hopefully everyone can figure out when theirs may arrive from that.


Also - I have received three packages since the move.  Thanks to Writers Journey, The Lost Collector, and Ron G.
Posted by AdamE at 5:51 PM 1 comment:

Is anyone else still waiting on their MCG cards???

I requested delivery on 2-14 yet I still do not have any cards in hand.  Does anyone else out there have an open MCG order or did mine get lost in the mail with my recent change of address?
Posted by AdamE at 10:43 PM 16 comments: