An Afternoon With Preacher Roe

Recently I was pulling together some Dodger cards for a trade and it made me think of some Autographs that I had. I live in a tiny town in southern Missouri and our most famous resident is: 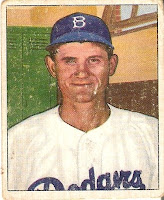 Preacher had a great career but I don't think he is remembered as well as most other legendary Dodgers because he never won a World Series even though he pitched in 3 of them. He tells a great story about pitching to Mantle in game 2 of the 53 Word Series. As he tells it he was a little tired by the late innings with Mantle up to bat. He had just spit on the ball and the ump caught him.The ump yelled from the plate, "preach did you spit on that?". Well of course Preacher said no. the ump said give me the ball, so Preacher rolled it to home plate. Unfortunately he needed the spit cause Mantle went yard on him and won the game but isn't it a great story. It is a story most baseball fans will never hear about. Any time you can talk to an old player do. They will always have a some interesting stories to tell.

Preacher now spends most of his free time golfing but on this particular day our local high school had a tournament that appropriately named the Preacher Roe Invitational. I took my son Corbet to get some autographs.

And we got some great autographs too.

I had already picked up the perfect item to get autographed . A glove from the 40's with his facsimile signature on it. 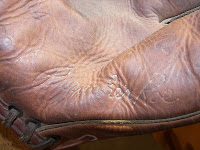 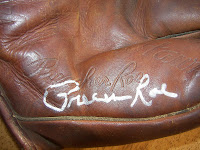 Now think about that for a minute. He was such a good player they made baseball gloves with his signature on them. How many players get that in our day and age? This has to be a rare autograph because Preacher told me he had never even seen one of these gloves before. 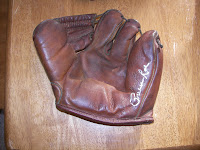 As rare as this item is it isn't a 1 of 1 though because I had two of them for him to sign; one for each of my boys (one of them couldn't go that day). Now I have to find another one of these glove to have signed for my little girl (and maybe one for myself) 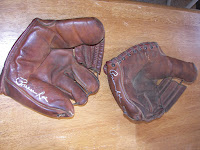 I know my son is to young to appreciate our meeting with Preacher but at least he will have a great autograph and some pictures of himself with a legend.

Great story. Neat to have such a famous person so accessible.

Those gloves are awesome. Great story.