I have owed a few people cards and I think I got everyone I owed something shipped yesterday along with a couple randoms.  If you are not below and I owe you something please let me know.

Again if you are not on the list above and should be please let me know.

I made another killing on a Listia lot.  First of all for reference 250 credits cost $5 if you were going to purchase them.  I listed a 1999 Finest Nomar that I had 2 or 3 of and received 137 credits for it.  With me so far?  I then got the following lot for 134 credits. 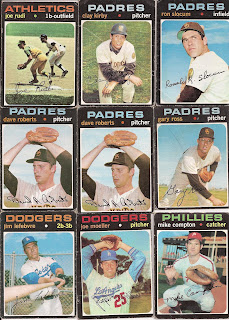 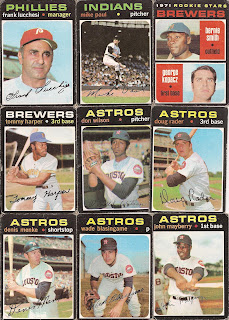 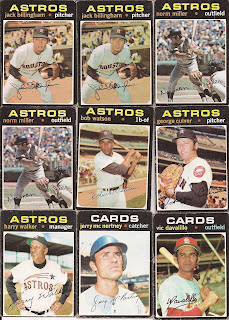 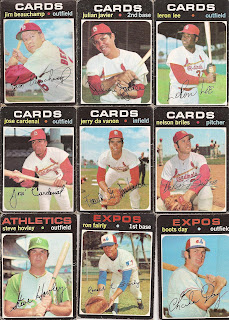 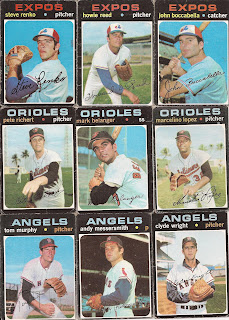 That is forty-six 1971 Topps card for a Nomar double.  That is a killer trade in my book.  The Brewer cards are earmarked for Collectors Crack and if David in Arkansas needs the Indian it is his.  Everything else is for trade to my fellow bloggers.  What you guys don't need is getting listed back on Listia one card at a time.

If you guys are not using Listia to pick up cards  yet you really should be.
Posted by AdamE at 12:51 AM 3 comments:

Another Kick In The Nuts

Just when I get back to doing some posts my computer goes down.  It sucks trying to do a blog post from a phone.  Plus the Red Sox can't beat the Orioles or the Royals.  WTF!!!
Posted by AdamE at 1:48 AM No comments:

Not Quite The Ordinary

I have been spending a lot of time on Listia.  For those of you that don't know it is a auction site that deals in credits rather than money.  The cool thing is you get free credits just for joining.  That means free cards.  After I spent my free credits I went back for more by listing some items.  It got me more credits, enough to buy this: 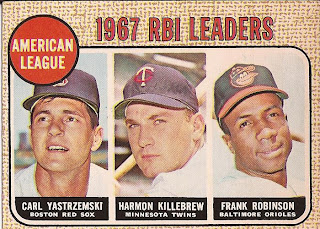 With the credits I got for a 83 Topps Yaz, a 71 Mike Andrews, a 74 Bobby Bolin, and a 74 Dick McAuliffe I received enough credits for this 68 LL card of three Hall of Fame players.  Two triple crown winners and one of the most feared hitters of his era. 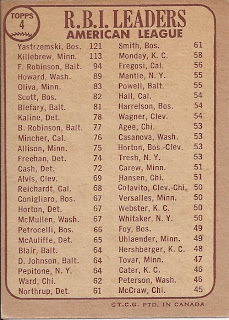 So basically I traded a four doubles for this one awesome card.  That isn't the best part of it either.  If you have good eyes you might have noticed this:

Yep, this is no ordinary 68 Topps card it is a 68 OPC.  If you haven't tried Listia yet you need to.  Use one of the links I supplied and get free credits just for signing up.  That is free cards just to try it out.
Posted by AdamE at 7:14 AM 2 comments:

Major Addition to the Player Collection

Have you ever received a card you thought you would never own?  I did last week.  I don't even know what to say about it so here it is: 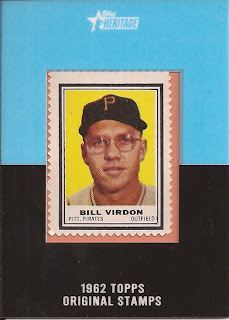 That is a 2011 Heritage Stamps Buyback Bill Virdon.  Why did I think I would never own it? 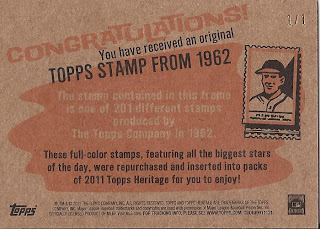 I know it is hard to see the foil in the top right corner but it says 1/1.

I used to be the Dan Marino Super Collector in the late 90s.  I wasn't just a super collector I scoured online trade sights and ebay and I really think I was The Marino Supercollecor with almost 2000 different Marino cards.  (I also was single, lived with my grandparents, and carried a full time job so I had lots of extra money to spend)  I quit when all the shortprint cards came out because I couldn't ever get "them all" anymore.  I quit collecting all together soon after that.  1/1 cards drove me from the hobby.

So when I started my Virdon collection I did it because he was from my hometown but also because I had a chance to get them all.  Yes there are some oddball short printed cards from the 60s but no 1/1 cards.  Topps screwed that up in 2011 but I ignored it and didn't consider it as something I needed.  But low and behold I now have it in my collection.
Posted by AdamE at 4:37 PM 6 comments:

I got a heck of a package from DocHodolay.  It was one of those packages that do damage to a want list.  Not regular damage it was all Team Set completion cards. 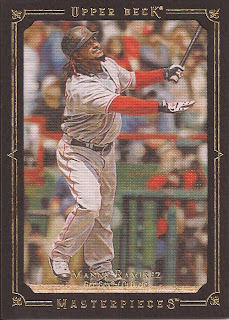 1999 Score Nomar.  That blue shirt under his jersey doesn't quite look right for me.  Should have wore a Red one.  I know Under Armor wasn't around to sponsor guys back then but surely he could afford something red. 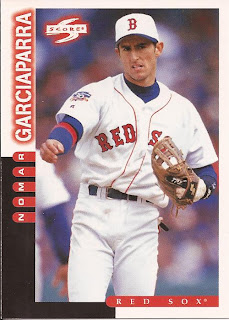 Not a very faltering shot of Bowden, even it is still a card that I needed.  At one point I thought Michael here was going to become a really good pitcher.  It hasn't happened yet and he isn't having that great of a year. Evidently Theo remembers something about his potential though since he traded Byrd for him. 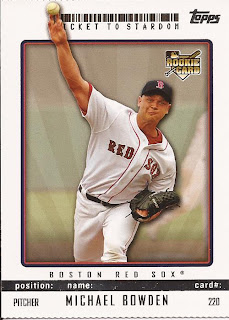 Jed is tearing it up in Houston.  Hopefully he stays healthy and turns his career around down there. 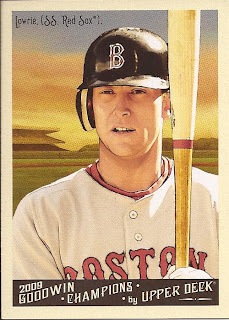 Ortiz is carrying the Red Sox this year.  Yeah, we are under .500 but you can't expect Big Papi to carry em all.  Not that I'm superstitious but I quit blogging about mid-season last year and the team fell apart maybe all that they need is... 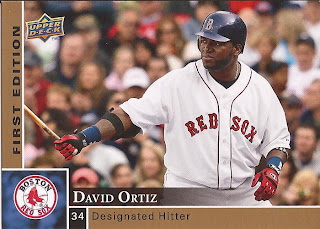 This is the second of what I feel will be many many more trade packages I get from Mat.

Brian from Play At The Plate recently held a contest and I was lucky enough to be selected the winner.  He sent me a rack pack of Gypsy Queen.  Not only is this a contest review but this is the first GQ I have seen this year so I get to review the set itself.

The rack pack had 3 mini packs in it and one pack of bordered cards.  Here we go:

These are some really good looking cards.  I got 2 Braves that are destined to be part of some Braves package and a mini Brewer to send to Alaska.  There are so many Brave bloggers I am always out of Braves cards. 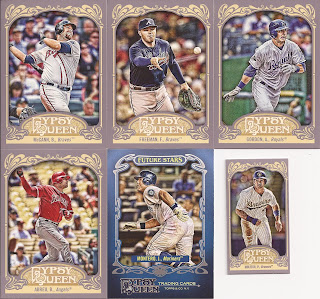 I have always hated the Padres camo uniforms.  A year ago I would have packaged those Wilson cards right back up and sent them to Brian.  Now that he is an Angel though they are destined to rot in a box in my closet cause nobody want Angel cards.  At least someone may want that black bordered one. 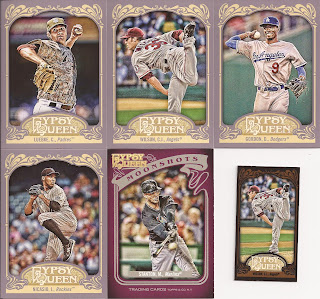 A Kofax! If I didn't think he already had it I would mail that sucker to Night Owl cause I'm pretty sure I owe him cards but I'm sure someone already sent it to him.  (I'd send him the Gordon form the last pack to but same thing)  I don't like how many times Mariano shut my team down in the 9th inning over the years but I hate the way he may have to end things. 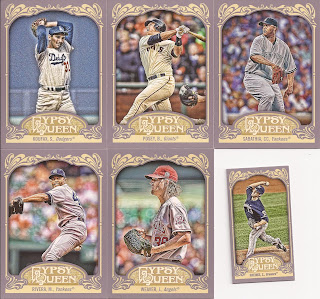 Now the bordered cards.  Castro Kershaw and Bench.  That means I got shut out of Red Sox.   I guess so as they go on the field so goes my pack opening.  (Maybe Night Owl needs this one)

Luckily Brian sent along one extra card.  A bordered Lester.  Finally a Red Sox.  That is why I don't open many packs, I never get any Red Sox that way. 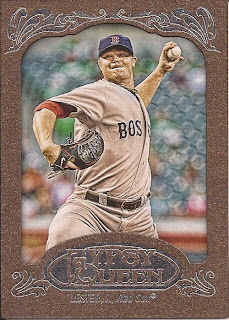 Thanks for the great contest Brian.   And for throwing in that extra Red Sox card.
Posted by AdamE at 12:25 PM 3 comments: