Card Out Of The Clear (Royal) Blue

I received an unexpected package from Matt at Heartbreaking Cards of Staggering Genius. It contained a jersey card of Edgar Renteria. 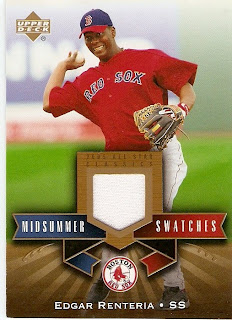 Now, Edgar really sucked as a Red Sox. I mean really sucked!! That is putting it as nice as I can. When we signed him I though it was a great pick up but boy was I wrong. He was hopeless out on the field. Error after error after error came from the SS position thirty of them in all. (Plus he throws like a girl. Go ahead, look at the picture again; see what I mean.) His bat was almost as bad. It must just be an AL thing because he played good for both the Cardinals and the Braves but sucked in Boston and Detroit. All that aside I love the card. I want a game used of every Boston player and I didn't have one of him yet. So thank you Matt.
Posted by AdamE at 2:45 PM

He may have sucked for BOston, but he was an All-Star in Atlanta and we traded him for Jair Jurrjens! You can't do much better than that as a player with only two years with a club.

MLB trade rumors just posted that he has been signed by the Giants.

I admit he was great in Atlanta. He just he just can't hit.. or catch...or throw, in the AL. Maybe going back the the NL with the Giants will bring the All-Star back out of him.