**Note to all - I wrote this post in March.  It was originally going to be a smart ass post from a note I got in a package from Night Owl.  I thought it was a funny idea at first but abandoned it midpost because I thought I sounded kinda dickish. Seven months later I left a 350+ word comment on Greg's blog and he said I should be writing my own blog.  So dickish or not here is my unfinished post from March.

***You will notice some of the stuff is pretty dated

So Night Owl thinks that get me to end my month long sojern from blogging with a note attached to some cards? 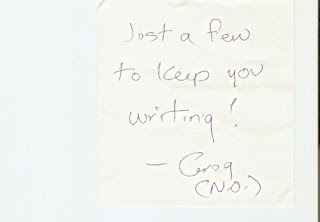 Surely he must know that writing doesn't come as easy to us all as it does to the Blogger of The Year.  Not all of us can knock out a string of epic posts day after day for months on end.

Greg thought he could get a trade post out of me by sending some cards but instead of a trade post with all the great stuff he sent me you are getting an Anti-Night Owl Trade Post.  You will not see any of the stuff from Greg.  It is already marked off the checklist and filed away in binders and boxes.
﻿
So here are a bunch of trades from not Night Owl.

Greg can knock out a post when is sickly and this guy can just "mail it in" and come up with one of the most epic posts ever.  He has kind of went to the horses lately though.  Greg, do you want to see a note that gets your cards posted.
﻿﻿


Dayf offered to make me a pony sketch card and I declined.  I get enough ponies from my 5 year old daughter.  Umm... not that only 5 year old girls should like ponies... but... well back to cards!

Dayf sent a buch of stuff. 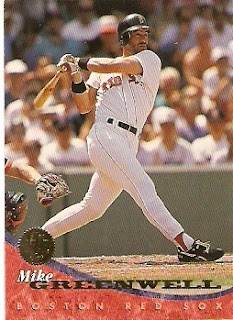 I hate to admit I still need 94 Leaf cards but I do.  I need one less now.

Greenwell is one of the players that made me start liking the Red Sox back in the late 80s.  Greenwell, Burks, and Benzinger.  I didn't even know why I liked them only that I had lots and lots of cards of them.  I guess you have to start somewhere. 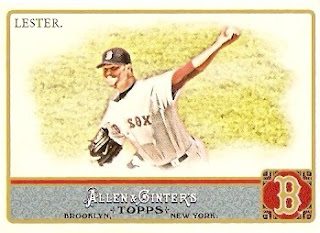 Speaking of 2011 A&G Lars Anderson Dayf sent me the mini.  Always strange to get the mini before the regular one. 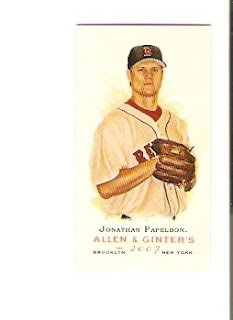 I snagged the new Phillies closer from him with a comment.  He was trading Paps off with a bunch of other cards buut was nice enough to set him aside for me and give the option of another player to go with the rest of the trade stack.  Good for me. 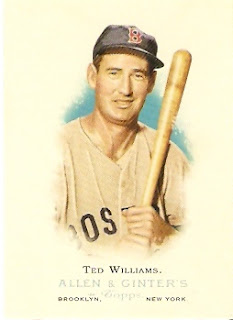 I love getting WIlliams cards.  I have wanted this one for a while and was happily surprised to get it in the package.  Dayf has sent me Williams cards multiple times now.  Let me check that Night Owl package... nope no Williams there. 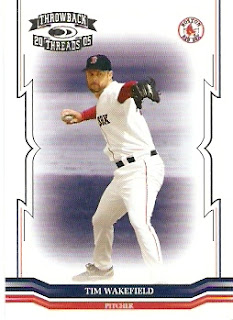 I'm going to miss Wake if he doesn't come back this year.  (and it looks like he won't)  I think they should sign him to ne the guy that makes a start when a regular gets hurt or comes in to mop up.  I know everyone bashes him for how long it took him to get that 200th win.  How soon they forget that twice while he was at 199 he had the lead only to have Bard drop it for him.

***See what I mean by dated 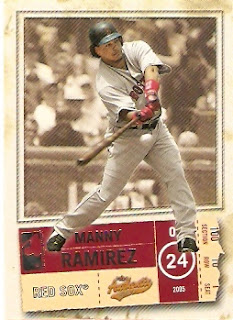 Will anyone sign Manny for half the season?  To bad we can't take him for the first 50 games while CC sits on his but and collects big fat paychecks and then let Manny sit the back half of the season. 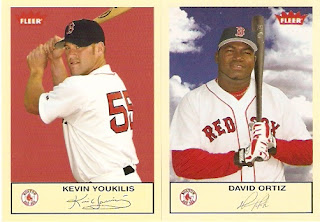 The first Wal-Mart blaster I ever bought was Fleer Tradition.  I only pulled one Red Sox and it was a League Leader card.  I had never heard of SPs in the base set before and this set was full of them. 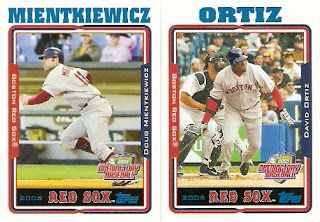 I have never bought a pack of Opening Day.  You would think I would have all the 2005 ones since they had just won the World Series and this was one of the first sets out in 2005 but I never bought any and still need most of them. 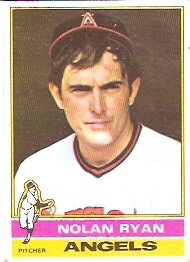 This Nolan Ryan came from Royals and Randoms.  It was thrown in as an extra with all the cards I got in his giveaway "thingy".  I don't know what kind of give-away to call it but it was pretty cool.  (even though some non-Red Sox collectors scooped up most of the Red Sox at the start)  Why post a card from Royals and Randoms and not Night Owl? Because Nolan cards are great Trade Bait so if you want him let me know.

It was great to see a few posts from The Collective Troll a awhile back.  I was even happier to see a package from him in the mail.  Why post Troll cards and not Owl cards?  Vintage, Minis, and Shininess!!! 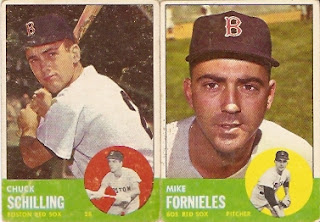 The best packages are filled with Vintage.  Marck is working on the 63 set and must have had some doubles.  One mans doubles are another mans binder fillers. 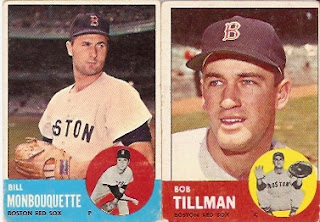 Monbouquette is almost as long as Saltalamacchi.  I never saw him play but I'll always remember him because he is the last card I need for my 1960 team set.  He has been the last one I needed for well over a year.  At some point I need to break down and just buy it online. 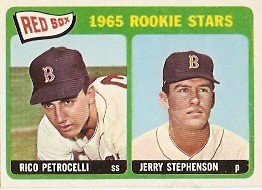 I tried to trade for this card on the Diamond Site like 90 times with no luck. 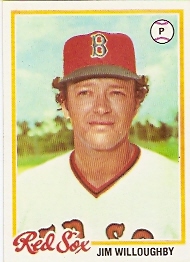 This one I did have luck trading for on the Diamond Site.  He will now be trade fodder for something else I need. 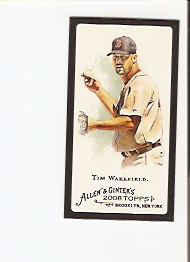 At one point I wasn't going to chase Bordered A&G Minis.  I even traded one or two off.  But then I got enough of them that I had to add them to the list and start chasing them. 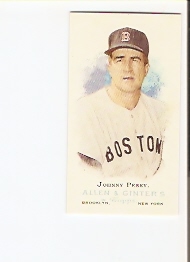 I read somewhere that Pesky is in bad health.  Get well soon Johnny!! 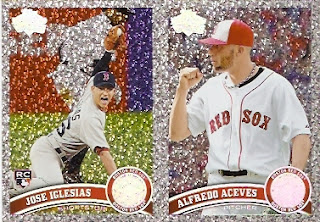 I always want to call these sparkle cards but then I remember those dumb ass cards with a single spot of them that is airbrushed as a sparkle.  These are called something else but they are way better than the shiny spot cards. 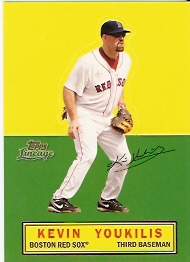 ﻿I'm going to guess that Night Owl has a thing for these with his affection to all things color.  Even a color blind guy like me appreciates them. 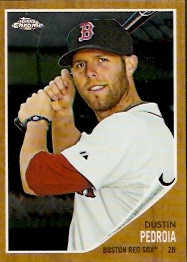 Not your run of the mill Heritage. Chrome Heritage.


**At this point I said Greg isn't going to think this is funny and quit writing.  I have no idea what is was Greg sent me in that package so long ago.  I'm sure it was some great stuff because he always checks my wantlist before sending anything.

So Greg, thanks for the cards and sorry for being a dick.
Posted by AdamE at 8:59 AM No comments:

Cards for Bobbleheads (found in my draft folder from July)

My kids collect D-Back bobbleheads so I take them to bobblehead games.  This means I get one too.  I traded my Kirk Gibson bobblehead to Dodgerbobble for some cards.

I was excited to get these 90 Bowman cards.  Yes 90 Bowman is one of the ugliest sets of all time but I was happy cause these two cards finished off the team set for me.  I am always incredibly excited to knock off a team set. 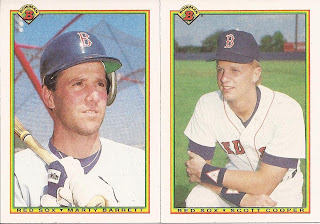 This isn't your run-of-the-mill Finest card.  This is actually a refractor.  I love shiny even though my scanner doesn't. 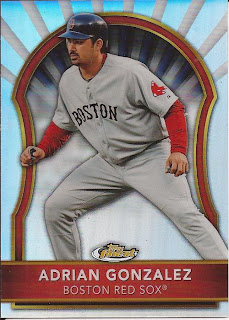 Speaking of shiny and Finest here are some X/Atomic/Whateever they call them Refractors.  This isn't something that I would normally seek out but I like getting them in packages just the same.  Ironically I received these about the same time Jacoby and Crawford returned from the DL. 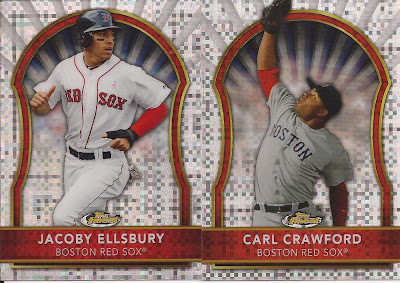 I'm not sure exactly what is going on in the Archives In Action Jacoby card.  He is sliding into home but is the ball already in the catchers glove?  Why is the catchers mask all askew?  Was he safe or out? 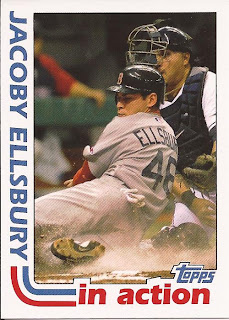 This card is cooler than the scan.  I had the scanner set to 2.5x3.5 but this card was a little smaller than that so it got scanner garbage all around it.  It is a realy nice card out of the Archices set.  I really like all the inserts out of Archives and I am going to chase all the Red Sox.  These two made a good dent in my list. 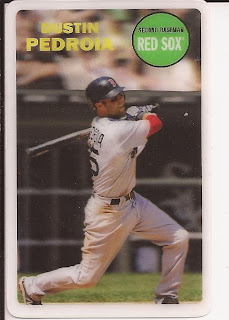 Thanks for the cards Joshua!!

A Little Help From My Friends

This year has been a hectic one for my Bill Virdon player collection.  After years of no cards of him being produced except Heritage Buyback cards, 2012 has become the year of Virdon autos.  Heritage released two of them and Tri Star has released 4 that I know of.

(There could be other serial numbered ones in Bronx Edition.  I submitted an email to TriStar but I haven't got a response from them yet to verify)  **see below

The TriStar cards are ugly frankencuts but I still need them because...  because... Well, just because Dammit!!

When the TriStar 1/1 showed up on eBay I was too broke to buy it.  I though that this is where my player collection would fall apart.  After a plee to the blogging community three bloggers offered to help me out by purchasing it for me and letting me pay them back in trade.  Brad of Brad's Blog won the eBay auction for my newest Virdon 1/1. 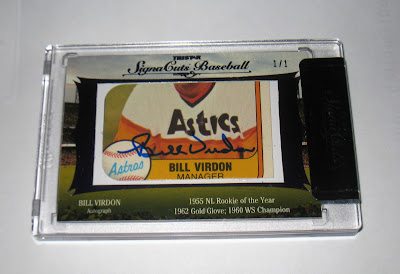 It isn't the prettiest card in the world and I have no idea why they cut the round edges on the left and squared off the right but I still love that it didn't get away thanks to Brad.  He pretty much saved my Virdon collection.


**I have now received the following response from TriStar:

Department: Customer Service
Subject: 2012 Signa-Cuts Bronx Edition
Adam, Yes there are various levels of Bill Virdon in our BRONX SignaCuts product. The complete checklist can be found at www.signacuts.com. Thank you for your support and business. Sincerely, TRISTAR Team