A window of hope

The continuation of yesterday

The promise of tomorrow

A new season starts today.  Baseball is here, it's spring.  It's Opening Day.  It's Glorious.  Right now everyone is equal, everyone has promise.  So take some time.  Enjoy life.  We don't know how many Opening Days we have left we only know we have one less than last year.  So go watch baseball.  At a live game, your living room, or the local sports bar, it doesn't matter where, find a friend or family member and relax to the sweet sounds of summer.

It has been a while since I posted.  (again)  I tried to start a post quite a few times in the last month or so but I get to the part where I have to scan cards and my ambition leaves me.  Oh how I hate using the scanner I currently have.  It's problem is it does zero cropping by itself.  I have to scan, then save, then open with paint, then crop, and then save to jpeg.  Yuck, that is way to convoluted I'd rather just skip it.  But it has been awhile so I bit the bullet and made one scan.

The reason I collect  Virdon is because he grew up in the same small town that I did.  I'm not the only kid that applies to as my friend Joey also has a bunch of Virdons.  I have known he had this voided Topps check for about 10 years now but until last week I never could get him to price it to me.  Well he finally priced it and it has made it's way from West Plains to Phoenix.

I think it is cool because it is issued by Topps, the thing is I have no idea why it was issued.  See the date March 7, 1969?  One would think that it would be for the 1969 Topps set but Virdon didn't have a card in the 1969 Topps set.  Not only did he not have a card in 1969 there was no team card where he would have been pictured with everyone else.  He didn't have any Topps cards between 1965 and 1972 so why Topps was giving him a check to use his image is a bit of a mystery.  My only thought is maybe Topps just cut a check to everyone rostered the prior year and in 1968 Virdon had 3 ABs as a Player/Coach.
Posted by AdamE at 2:59 PM 5 comments:

I decided that I was too far behind on newer cards and that I needed to start whittling away at them more.  It is so bad I didn't have anything newer than 2014 on my want list.  So I went onto eBay and bought complete Red Sox team sets (series 1, 2, and Update) for 2015-2018. 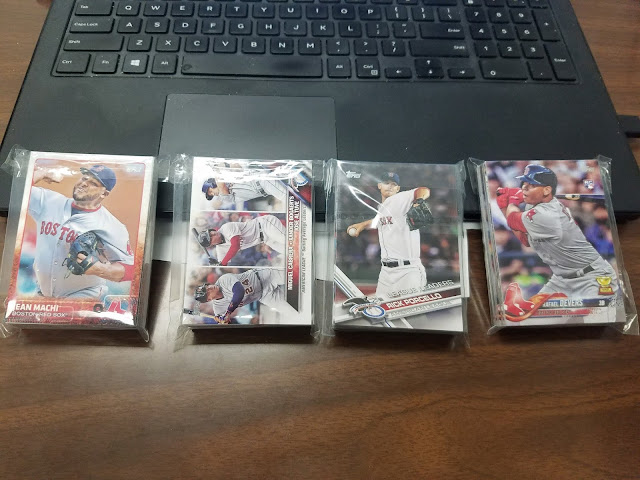 My plan was to scan all the cards for each year and post them here.  However once I got them all in front of me I realized what a monumental task scanning over 100 cards was going to be and scratched that idea.  Four years of bagged team sets is as close as I'm going to get to scanning and posting them.

Filling my want list with these four complete sets I realized I have no idea how many sets are being put out per year anymore.  Yeah I know base, Heritage, A&G, Bowman, Chrome, Stadium, Bowman Chrome come out every year but I know there are a bunch more.  I clicked over to The Trading Card Database and quickly found out just how far behind I have fallen in my collecting by ignoring new cards for the last few years.  I kept telling myself that later I would just buy them complete but now I it is a giant task.  (and an expensive one to do all at once)  Heck is a pretty big task to just figure out all the sets that came out in the last 4 years not to mention finding complete sets for them all.  I don't know if I should just start at 2015 and work my way through or just pick and choose which ones to chase.
Posted by AdamE at 2:21 PM 3 comments: