I have been telling people to sign up for Listia for a long time and once again I struck gold on the site, literally.  After a short period of no Red Sox worth mentioning being posted I had another great pickup.  A 1996 Ultra Gold Medallion Mo Vaughn.  "The Hit Dog" only set me back 30 credits.  (to lazy to scan so I swiped the image)

Now I know lots of people hate gold foil and this card has it in spades but I really like it.  The sheer gaudiness of it makes this card great.  Not to mention the fact it is of the former Red Sox AL MVP.

I always thought Mo would be an interesting person to have a player collection of.   He was a star of a big market team during the height of card companies experimental years so he was in virtually every really cool insert set; plus he isn't highly collected, and retired before the 1/1 garbage started coming out.  Kind of a perfect storm for a player collection.  I willing bet that there is a blogger out there with a jewel case, collecting dust, full of Mo cards that I would love to trade for.

If you haven't done it already go to Listia now and sign up for free credits that get you free cards.  After that auction off your Topps codes to get more credits to get even more cards.  The great thing about auctioning codes is there is no shipping fees.
Posted by AdamE at 3:47 AM 2 comments:

So what if I’m about 2 months late with this post. Most yearly goals have fallen by the wayside for people by now so why not start where others have fallen off. Better late than never right? I'm about to go through ANOTHER major life change so hopefully I still have some time for cards and the blog this year. (nothing bad, but kinda scary, maybe more on it at some other point)  Anyway on to my goals. 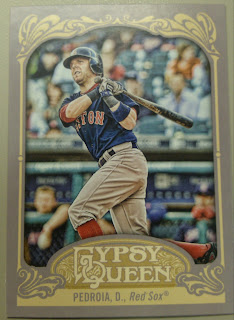 What is a baseball card blog without a baseball card?  Here is a Pedrioa SP Variation card that I have a double of anyone need it?
Posted by AdamE at 11:28 AM 3 comments:

It has been a little while since I have posted anything. Few things told me I should probably write something.

You might think that stuck in the snow is no big deal that shit happens from time to time. Under normal conditions you would be right; the thing is though, I live in Phoenix. I wasn’t really stuck like my car wouldn’t move though. See last summer sometime my windshield wipers quit working. I didn’t know how to fix them and it wasn’t any big deal because it doesn’t really ever rain here and when it does it doesn’t pour or anything. We get that bullshit amount where you have to turn your wipers on and off over and over again because it doesn’t come down hard enough to leave them on. So anyway I get out to my car yesterday and it is covered in snow. I scraped it off with my hand and started to drive but I didn’t get a block before it was covered up again and no wipers to clear it off. Basically the sign that I need to get off my ass and fix the dam car which made me think “I need to get off my ass and write a post”.

As you may or may not know I have a Fantasy League called Card Bloggers Unite. As you probably gathered from the league name it consists of a bunch of card bloggers. 2013 will be our 4th year of the League. Dayf somehow came from next to last place in 2011 to win the championship in 2012. I was a real fucking injustice too since he named his team after a pastel girl’s toy horse. I sent out a league renewal yesterday and half the league has renewed already. We usually lose at least one every year so after a week I may be asking for new participants.

I have received a bunch of packages lately. The latest one was from Cards on Cards. It wasn’t your ordinary package either. You would think a guy with a blog called Cards on Cards would send cards right? Well this time he sent a truck. 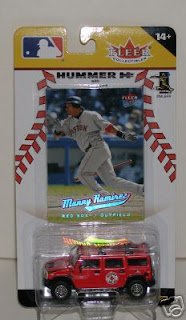 To be honest he sent cards too but just because I got off my ass to write a post doesn’t mean that I got the gumption to break out the scanner and it was easier to yank the truck image off ebay than it was to search out the cards he sent. Technically there is a card with the truck though so it is still card related.

Thanks Kerry! I’m working on a return package but it will be all cards, no truck.