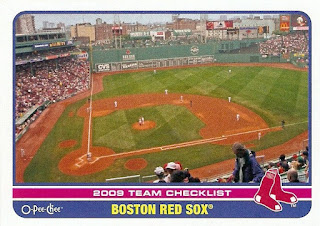 Twas the night before Christmas, when all through Fenway

Not a creature was stirring, but perhaps Jason Bay

The red socks were hung by the Monster seats with care

In hopes that John Henry soon would be there

The Pink Hats were nestled all snug in their beds,

While visions of Jacoby danced in their heads
And Heidi in her 'kerchief and TC in his cap
Had just settled in for a long winter's nap
When out on Landsdowne there arose such a clatter
I sprang from the press box to see what was the matter
Away to second, Ellsbury went in a flash
We're hoping that he and Cameron won't clash 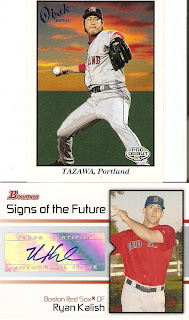 The moon on the breast of the new hockey rink

Gave a luster of mid-day to old Charlie Zink

When what to my wondering eyes should appear,

More rapid than Yankees, his prospects they came

He whistled and shouted and called them by name

On Rizzo! On Gibson! On Fuentes and Pichardo!

To the right field porch and the top of The Wall

You won't dash away to Hoyer, never at all."

Back to the playoffs, the players they flew

With Lester and Beckett and John Lackey, too

And then in a twinkling, I heard in the foyer

The prancing and pawing of Dustin Pedroia

As I drew in my head, and as turning around

Down the chimney Big Papi came with a bound

He was dressed in Ed Hardy, from his head to his foot

A bundle of bats he had thrown in his pack

And promised his production soon would be back

Tito's eyes -- how they twinkled. Youk's beard, kind of scary

Drew's shoulder was sore, but Lowell was ready

Pap's droll little mouth was drawn up like a bow

The beards on their chins trimmed up by L'Monstro

The stump of a butt, Rem Dawg once held in his teeth

The smoke it encircled his head like a wreath

He quit, and here's hoping that still is the truth

Because, Jerry, we want you back in the booth

'Tek spoke not a word, but went straight to work

Helping Victor Martinez, 'cause he's not a jerk

Marco Scutaro was there, decked out in holly

Shortstop this season won't be so sorry

Bard sprang to the mound, his fastball did whistle

And away went the Sox, on a World Series mission

I heard Castiglione exclaim, as the ball flew out of sight

"Happy Christmas to all, and to all a good night!

Be thankful we are all not Kei Igawa! Great poem! Merry Christmas Adam!!!!!!!! Still hate the Sox, but really enjoy your blog, HAPPY HOLIDAYS!!!!!!

I Am The Average Joe said...

absolutely awesome. As a Mets fan, do me a favor and tell Bay to make up his mind already. Merry Christmas

Night Owl - I didn't actually write that poem, I swiped it from Boston.com Extra Bases. Tomorrow's post was actually a bunch more work. Bloggger didn't agree with what I wanted to do with the pictures.

Merry Christmas to everyone.