It was easy picking some cool old cards because they were in the front of my boxing album.  I'm scanning both sides for two reasons.  One because the newly updated blogger uploads so much faster and two because I doubt allot of people have seen the front of these cards not to mention the back.

1938 Churchman's #12 Jack Dempsey  - Why I chose it?  First of all it is over 70 years old.  Secondly Dempsey was such a larger than life guy back in his time.  To top it all off my great grandfather used to talk about listening to his fights on the radio.  Just imagine following sports with nothing but radio and newspaper, boy are we spoiled.

1948 Leaf #101 John L Sullivan  - This was my first vintage boxing card.  It isn't in very good shape, even has a hole in it but you never forget your first.  Sullivan fought in the first (gloved) boxing championship fight.  He lost to a guy named Corbett (who I named my son after).  Check out this link to the famous Fight One More Round Quote by Corbett.  Years ago there used to be a boxing channel on RCA Satellite and it had the old man (Mickey) that was Rocky's trainer reading this quote.  That gravelly voice made it sound so awesome.  If someone finds it on Youtube please let me know.

1951 Ringside #29 Sandy Sadler - I don't know anything about Sadler except for what is says on the back of his card.  I just think it is a cool old design and it is the only 51 Ringside I own.  I also think the back has the best design of any on this whole post.

2006 Allen & Ginter #346 Bob Fitzsimmons - Some people out there may have actually seen this one before.  Probably allot even own it.  I chose it because it is the newest boxing card I have.  It is also the only A & G boxing card I own.  I don't own an original one or any of the other new ones.  That is right I still need to pick up a Frazier Tyson and Ali.
HINT...HINT...

1991 Ringlords #31 Julio Cesar Chavez - Because Chavez was such a warrior I chose this card.  He won his first 100 fights.  The back is a typical 90s style back just like any old baseballcard. 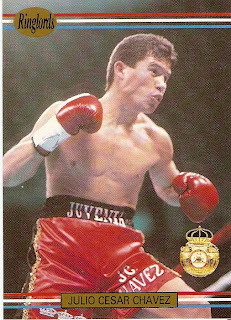 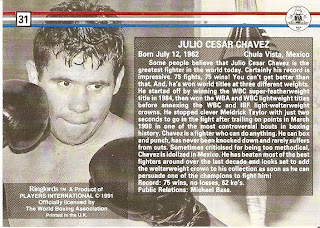 1991 Kayo #168 Aturo Gatti - I was actually going for a Roy Jones Jr card but was running out of time, paniced and chose this one instead.  Gatti was the most exciting boxer EVER!!  If you ever  see a Gatti fight scheduled on Classic Sports watch it; you won't be disappointed. 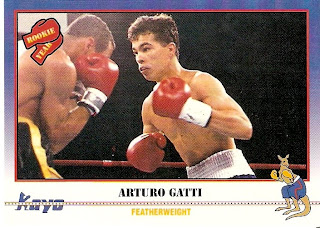 For everybody that says how ugly the Rookie Card logo is look at this monstrosity that is a rookie card label. I do however like how the K in Kayo is a little tiny Kangaroo.
Happy Boxing Day To All.
Posted by AdamE at 1:25 AM