Sorry for the lack of posts, Christmas and work have all of my time tied up right now. When I received a package from Dropped Third Strike I knew I had to set aside some blogging time. In other words it is 4:30AM and I am already awake. I sent him some Yankee cards and he responding by sending me a nice package of Red Sox. Eighty-Nine Red Sox to be exact. Amazingly enough I only had 5 of them!! I don't like to do it but to save some time I'm posting a bunch of cards on each scan.
Colors 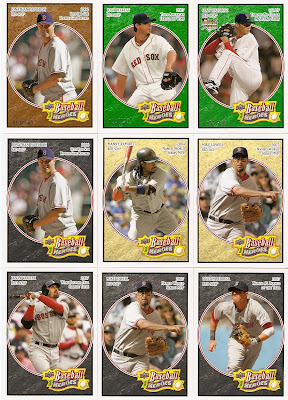 These are the very first colored heroes cards I have seen other than on other peoples posts. They look great when you put them next to their base card and their black version.
Minis 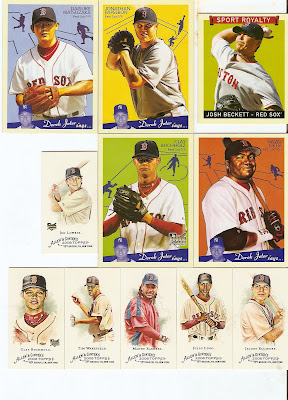 I got a Red Back Mini Beckett Sport Royalty and really chipped away at my 08 A&G Mini checklist. Here is what I still need:
55 Beckett 105 Papelbon 134 Varitek 171 Drew 333 Crisp 348 Masterson 350 Youkilis.
Just Beautiful 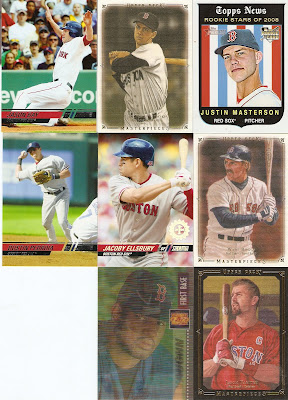 The best of both worlds here. The best photos and the best paintings. I also threw in a Heritage and a Sportflix he sent into the scan. My favorite card Of everything is that black bordered Varitek. It may be my favorite card of the year. 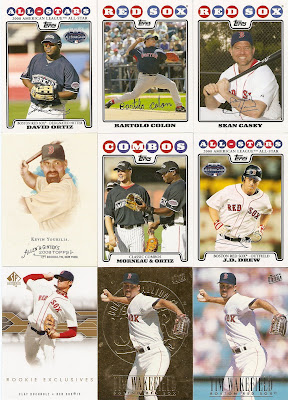 I needed all of these 08U&H. And I love that Gold Ultra Wakefield. Everybody bashes parallels but they always look good when you put them next to their originals. This one makes me want to pick up the rest of the Gold set from that year. I had just received the Youk SP in another trade so now I have one for my Youkilis collection along with my Team Set.
The Scans That Didn't Fit 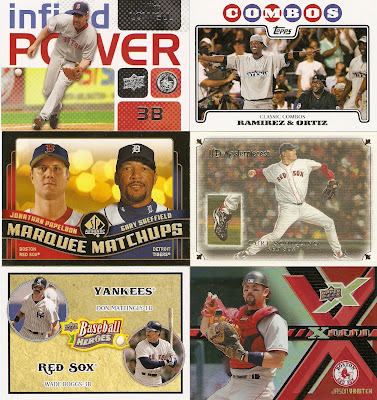 These cards wouldn't fit in the other scans but I like them just as much. Upper Deck X really sucks but that Varitek Xponential is awesome.
I would like to thank Dropped Third Strike again for all the Red Sox.
Posted by AdamE at 4:01 PM