It has been quite a while since I posted some Goose Joak cards. So without further ado: 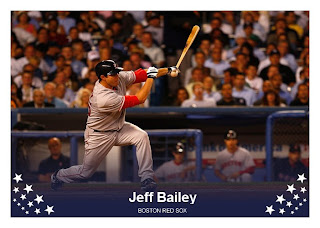 First up is Jeff Bailey. Lucky for Jeff Kotsay is on an extended DL stint or he would have never got this chance to play first. and Jeff has done a pretty good job stepping in for Youkilis for the last week. While he hasn't' matched Kevin's .400 BA, and we really can't expect Youk to keep that up the whole year anyway. I doubt Kotsay could have played any better than Jeff has. 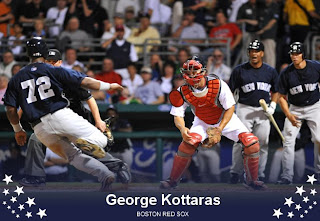 For the last 2 years every time Wakefield pitched you had to wonder how the catcher would handle it. George has done great so far. I would put his ability to catch a knuckleball right up with good old Maribelli. So far he has made the hardest job in baseball look routine. 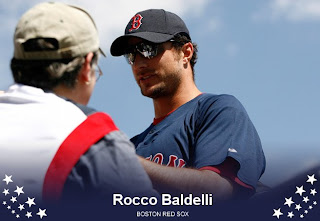 Rocco is fresh off a stint on the DL. Hopefully he stays away from it the rest of the year because we all know Drew will end up there eventually. He is a pretty good 4th outfielder and seems like an all around class act.
Posted by AdamE at 3:43 PM