On the 9th day of Christmas Cards From The Quarry sent to me...

Some Red Sox including  a Manny..
I found this in my drafts from April.  Evidently Cards From the Quarry sent me some stuff back then that I never got around to posting.  Hopefully I sent him something in return.  If not I hope he lets me know. 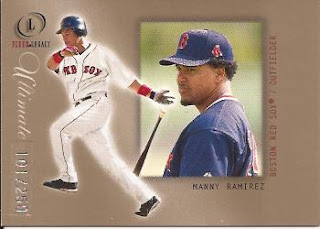 A Manny numbered 101/250.  Manny wants to come back.  I have been giving all my Cardinal fan friends a hard time by saying that the Cards are going to try to replace Albert's bat with Manny.  Manny or JD Drew actually.  They hate that. 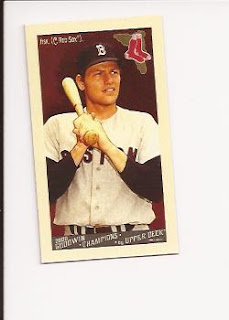 This is a Goodwin Mini Carlton Fisk.  I really liked this Goodwin set.  The 2011 set, not so much. 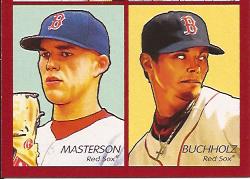 This is actually half a card.  Now he sent me the whole thing but the other half were yankee players so I didn't scan the other half.  Even looking at a zombie eyed Buchholz is better than a yankee.
In case I didn't tell you way back then, thanks for the cards Johnny.  If I owe you something please let me know.
Posted by AdamE at 9:41 AM

Ah memories, seems just like yesterday I was disappointed opening that Goodwin blaster.

You sent me a trade package for this. I didn't remember, but I do have my old trade mail archived. You sent me some older Heritage for this group.

Glad you liked them.