On the 1st day of Christmas someone gave to me...

A package of cards with no Return Addressee
That is about as much rhyming you are going to get out of me.  Seriously though I did get a great package that had no note and no return address so I don't know who to thank. 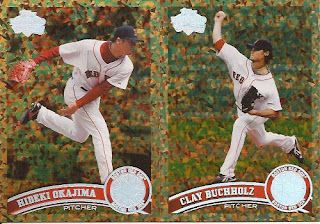 Liquor cards of Okajima and Buchholz.  I'm hoping that Clay rebounds from his injury in a big way this year. 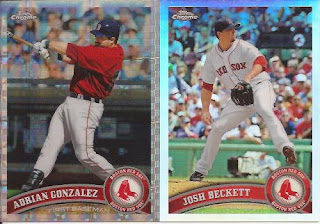 My first 2011 Chrome cards are Refractors this year.  The Beckett is a regular and the Gonzalez is what I call an Atomic though Topps calls them something else now.  Atomic got imprinted in my brain from releases in the early 90s so that is what they always will be, Topps new name be damned.  Is anyone else as resistant to change on these as me. 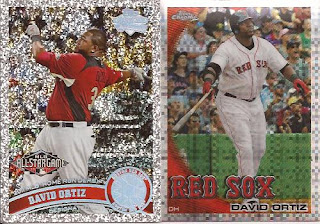 Some Big Papi bling.  Another Atomic from last year and 2011 shiny diamondy sparkle card.  I'm not really sure what to call it.  I think it is supposed to be a diamond parallel but weren't the diamond cards 1/1, imprinted with diamonds, and only available on the Give-Away site.  That makes these not diamond cards.  I want to call them sparkly but that would confuse them with the gimmick sparkle cards.  Instead I have deemed these Diamond Sparkly Cards.    Either way I am happy Papi is back for at least another year.  I really hope they give him a contract for a few years though.  Some people need to stay with the club that made them famous and retire there.  That is just the way it should be <cough> Pujoles 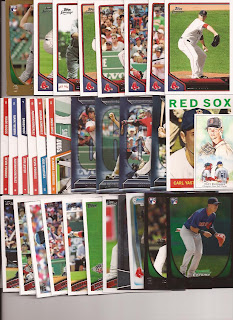 Whoever sent these also included a bunch of others too.  A great big stack of 2011 inserts, which is great because I didn't purchase any 2011 cards.  I seem to remember someone offering up a bunch of 2011 stuff but don't remember who that was.  Whoever you are thank you for the package and please let me know what I owe you in return.

This is the first in what I plan to be a series of posts with a bunch of stuff I received during my absence.  A trade catch up if you will.
Posted by AdamE at 7:59 AM