On the 8th Day Of Christmas...

I got a Virdon Courtesy of Joey. 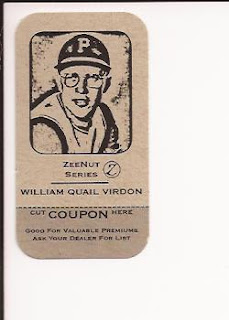 I have known Joey for YEARS.  If anyone recalls my Vince Carter Story it is the same Joey.  He doesn't have a blog but he is a long time ebay seller.  He picked up this really cool Virdon ZeeNut Virdon for me.  Now I don't know a thing about this set other than this card.  I don'e know if it was actually produced or if someone printed it up in their basement.  It is pretty cool though.  I set the scanner on 2.5" x 3.5" so that you could see that it is smaller thsn s normal card.  It is a little bigger than say an A&G mini and also a little bigger than a Kimball.  It has rounded corners so tit is definalty odd sized.  Mark's Ephemera had some questions himself about a card like this.

Surely someone out there knows something about these.  I have since seen another Virdon ZeeNut show up on eBay but didn't have any money to buy it.  It showed him in a yankee hat.  Whatever this thing is it is a cool card. 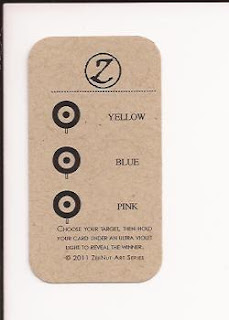 I'm going to go ahead and say that these are unlicensed "homemade" cards. The only seller I see listing these on eBay has tons of them at a pretty high price per card. The real ZeeNut cards were issued from 1911 through 1938 - when Virdon would have been 7 years old. All ZeeNut issues were minor league sets and they all had a very basic design. Without having one in hand, but reading both your description and Mark's description, I bet they're about the same idea as what I have at the bottom of this post. Someone probably just ripped the ZeeNut name for their set and had them printed for their fun and profit.

That doesn't mean they aren't cool.