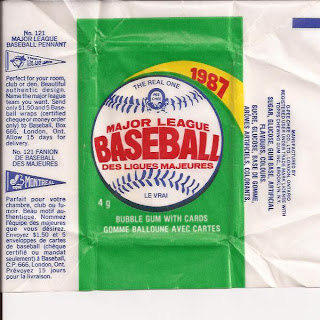 There were two different wrappers.  I scanned the first for post #1 here is wrapper type number 2.  Not as cool as the say to drugs wrapper. 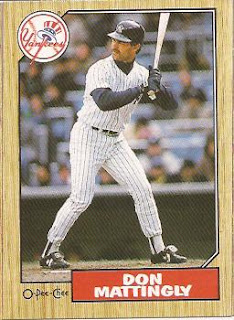 There were not many yankee cards in the box.  At least we pulled one the most famous ones possible.  (I won't say best, not a Mattingly fan)

At least the double in pack 6 was a HOF Red Sox
Posted by AdamE at 1:50 PM

Not sure how many Yankees cards should be expected. There were 396 cards in the set and probably 50 of them were Jays or Expos. There were three checklists and maybe a handful of special cards. Call it 335-340 cards across the remaining 24 teams. That's only 14 cards per team. I don't know the packs in the box, but if we're getting 2/3 of the set, that could reasonably be just 7-8 Yanks.

OK - looked at your picture of the box. It's a 36-count box at 7 cards per pack. At perfect collation, that's 252 cards. Even distribution would suggest about 8 per team.

I'm not sure what the total numbers for each team were but I know a few got shorted.

BA Benny would have got screwed but the Leaf made up for it though. There were probably 10 different Mets in the Leaf. Quite a few yankees in it too.