Looking for a little help...

I have been hitting the new Bill Virdon player collection rather hard.  When everything I have ordered comes in I will have about 80% of all his cards.  Here is one I picked up that I can't seem to identify.  It is definatly some kind of playing card.  The back has a sketch of a baseball on a black background.

Since I have never have bought one of those fancy baseball card encyclopedias I must rely on you good blogger to help me identify this.  Any ideas??
Posted by AdamE at 6:45 AM 4 comments:

Sweet Contest Winnings and a WTF from Troll Blog

I was the winner of the Collective Troll's first contest.  There were no Red Sox available so I chose the best looking card in the bunch.  It is a really nice Brooks Robinson Sweet Spot bat card.  It is crazy fat/phat.  Yes both varities of fat/phat.  As nice as it looks in a scan it looks better in person.  It doens't quite fit in my Red Sox collection but it is really nice never the less. 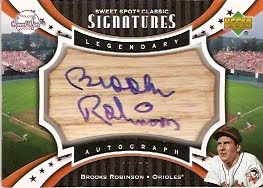 Brooks wasn't the only card he sent though.  A package from the Troll isn't complete without a couple surprizes.  And, boy were there some surprizes!! 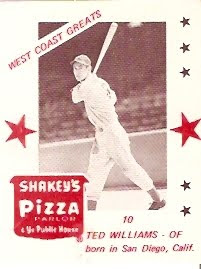 To me this Shakey's Pizza Ted Williams was the best card in the bunch.  Even better than the Brooks bat card.  I'm not sure what year it is from; early 70s would be my guess.  I love oddball cards and you can't ge better thanTed Williams. 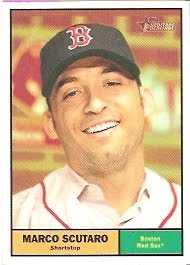 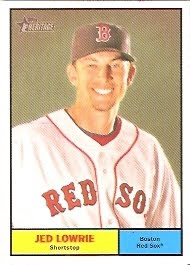 Marck also sent me a couple 2010 Heritage Red Sox I needed.  This years set has fewer SP Red Sox so maybe I can actually finish the team set this year.
Everything is cool so far. Now here comes the WTF.
Now I've always liked 75 Topps, in fact it is my favorite set.  But seriously... 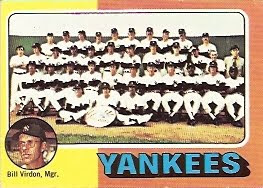 A Yankee Team card???   As soon as I saw it I thought WTF??  What kind of joke is this?  Yeah I bipped him a few months back but this is worse than a bipping.

Took me a minute to notice but I finnaly figured out wat this madness was all about.

This isn't a Yankee team card, it is a Bill Virdon Mgr card.   (that is what I am telling myself, it is not a Yankee card)  I was missing this for my Bill Virdon player collection.
Thank you Marck.
I will get that package I promised you in the mail eventually...
Posted by AdamE at 7:05 AM 5 comments:

Going to a card show

There is a card show in my not so distant future.  Not just any card show.  The card show with, "The Bin".  I screwed up and left some good stuff in that bin last time.  I had been planning to clean the bin out but it doesn't look like it is going to happen.  The problem I have is I will only have about $50 to spend, so there is a good chance I will have to leave good stuff again.  At least this time I know about going ahead of time and I know to bring my checklist.  I even went through it the other night ad made sure it was accurate.  Somehow I get cards in my binder without marking them off my list.  It bites me from time to time too.  The last time was a 61 Topps Hutchens that my list said I needed.  Not only did I not need it but it was in worse shape than the one I already had.
Posted by AdamE at 7:48 AM 2 comments:

When Tribe Cards announced his last great give-away I signed up for the Sox.   (this package came a long time ago and you can thank my prognastication for not posting it untill now)  When I  saw the extra fat mailer from Arkansas I was excited to open a big package of Wonderful Red Sox.  But when I opened it what I found was....White Sox. Now how am I supposed to write a post about bunch of White Sox?  After a little sorting I figured out what was scanable so here goes. 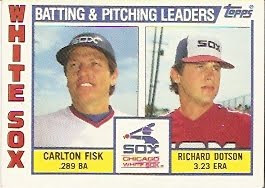 Carlton Fisk.  He is/was a Red Sox.  I can scan in and write about his card without much guilt. 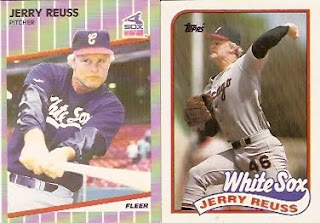 Jerry Reuss - Yea, I can post him too without guilt.  Why? Because he reads blogs, just ask Night Owl. 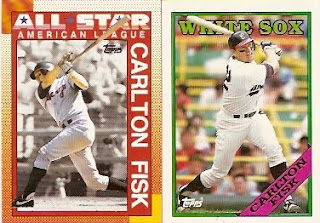 More of the ex Red Sox.  I'm pretty sure that Carlton spent more years in Chicago but in my mnd he is still a Red Sox.  Kinda like say.... Michael Jordan.  Jordan played last for the Wizards but everyone knows he is, was, and always will be a Bull.   (even if he owns the Bobcats he is still a Bull)  Speaking of Jordan there was a Jordan card in here too but I can't stan the guy so I'm not scanning him.  My blog my rules. 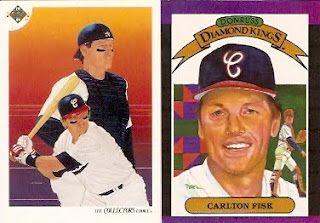 More Fisks?  Seriously, what else do you expect me to post. 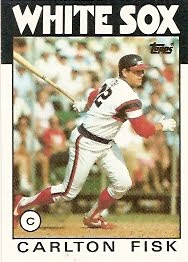 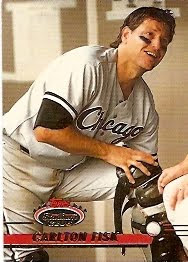 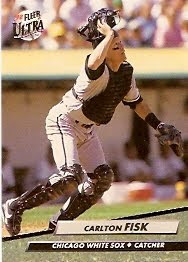 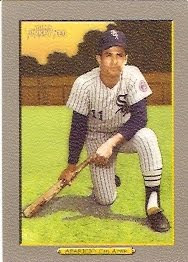 Did you really think that they were all going to be Carltons? 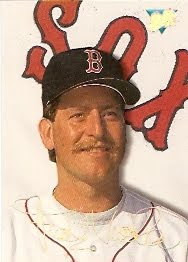 WHOOO-HOOO a Red Sox.  Actually there were quite a few Red Sox in the package.  And
the White Sox cards???  Why they are all going to end up in my sons collection. 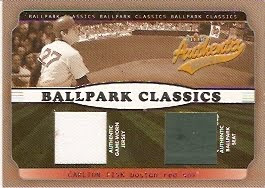 Stickig to the Fisk theme here is a dual relic card.  This is my very first seat card and Fisk jersey cad all in one. 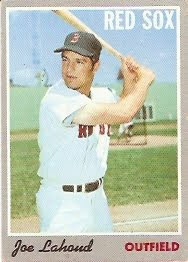 To me this was the gem of the package.  There is nothing better than vintage Red Sox cards.
Thanks for another great give away David.
Posted by AdamE at 7:55 AM 1 comment:

Deadline extensions are great for a procrastinator like me. I actually started researching this post Saturday but got sidetracked by actually buying stuff. So it is a total do-over.


First of all if I had 50K to spend on Ebay I would wait until the right card came along. The right card is an M-101 Babe Ruth. You know the card where he is in a Red Sox uniform. It would make for a short post though because it would take the whole 50K. Since this exercise is supposed to be right now I have to write a lot longer post and you didn’t really want me to mail it in that easily did you? (But then again at least I would be posting something; yea it has been that long since I last posted)

Not a lot of commentary because there are a whole lot of cards here.  But a ton of cool pictures of cards to drool over.

Next I did a Ted Williams Playball search and came up with the following.

After I knocked out all the Ted Wiliams cards I thought I would be getting I switched to doing a search for Red Sox only Pre-War and only over $250. Then I sorted by highest price first. 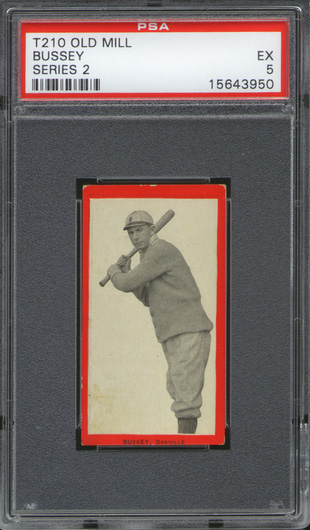 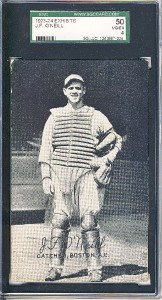 Insperation for those pain in the ass Goudey SP cards. 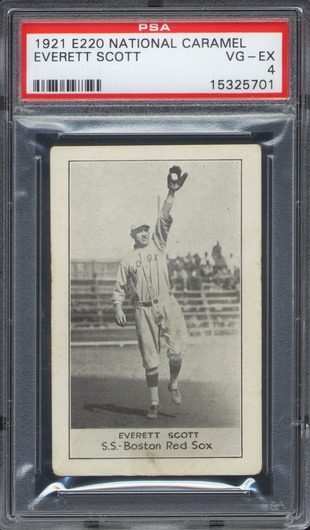 
Now I jumped to a search of “Boxing Card”. Only Pre-War sorted by highest price first.

I have no idea that these are and I would probably be getting a raping dropping a grand on them but they are really cool. Good thing Gellman gave me lots of virtual money
1909 Jim Jefferies Playing Card Complete Set $995 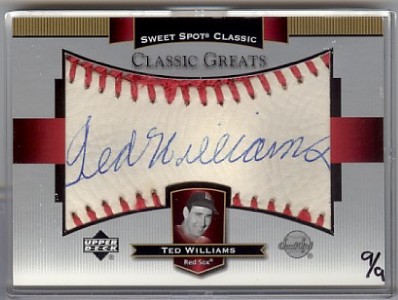 Total price comes up to $48,080 for 34 cards. Honestly if it wasn’t for the time limit I wouldn’t have picked a quarter of those cards. I would have nickel and dimed thousands of pre-war cards with my 50K. I also wouldn’t have ended up with a single auto.  I also have to admit that I probably couldn't have actually bought all those in 15 minutes.  I counted opening the window as bought.  I didn't even really look at some of them either.  I really REALLY wouldn't have bought that Williams/Sisler auto if I had really looked at it.  I hate those Frankencut autos.
Posted by AdamE at 11:19 PM 3 comments: