If I Were Commissioner of Baseball...

I’m not sure what number Bat-Blog-Around this is, 7 perhaps 8? Regardless Indians Baseball Cards posed the question what would you do if you were commissioner of baseball. Well here goes…


1. Expansion? - Hell No.. Not expansion contraction. Two teams gotta go. No economic factors will be taken into consideration. Starting next year the team with the worse record in baseball gets dropped. Not just next year each and every year. The teams that are dropped will be placed into the minors. Once the league is down to 28 teams the worst team still gets dropped. And the pro-team with the best minor league record gets promoted.

2. Playoffs – I like what we have lets keep it.

3. It's too expensive to go to games. Each stadium must have a percentage of low cost seating. And not just the worst seats either. I will make my rounds of each stadium sitting in different sections until I decide which ones need a price adjustment. (Being commissioner has to have some kind of perk)

4. Salary Cap – No I think my dropping the worst team idea will keep the lower level teams honest and profit-sharing will work because small market teams won’t be able to pocket the money they will have to spend it or lose their MLB team.

5. DH – Love it. The National League should also have it. I don’t’ wan to piss off everybody though so I’ll leave it and all the old farts that like the no DH rule alone.

6. All Star Game – I know I am in the minority here but I like that it is in the middle of the season and I like that it decides the World Series home team. But I think that the players and coaches should actually try to win. So big bonus to the winners nothing to the losers. The biggest payday goes to the winning manager. Lets say 1,000,000 so he puts the best dam players in and tries to win the game not keep everyone happy.

10. Joe Morgan will be banned from announcing. Not only that he shouldn’t even be interviewed again.

11. Pete Rose will never be on the Hall of Fame Ballot. He should have been enshrined already and will skip the election process.

12. Interleague – Keep it but change it. The NFL plays interleague and everybody still watches the Super Bowl so everyone that uses the “you shouldn’t see a NL team play a AL team till the World Series is full of it. Why do all interleague games have to be at the same time? More important that when interleague games are is the competitiveness between them.

13. All new stadiums must have a retractable roof. No exceptions. It is dam ridicules that Texas built a ballpark with no roof for less money than they gave A-Rod.

14. Baseball Cards MLB will push to MLBs presence amongst kids through baseball cards. There will be a sole license (like Topps has now) but there will be another company that is given permission to print cards for advertisements. That company will create things like Post Cereal Cards, Wal Mart, McDonalds, Burger King, etc…

15. If the pitcher throws at the batters head he is ejected. Anything else is baseball. Maybe 6 guys get beamed in a game, eventually they will work it out.

16. No erectile dysfunction commercials during games.

17. Draft Picks would be tradable just like the NFL.

18. Blackouts the areas need to be redefined. There is no reason in southern Missouri I shouldn’t be able to choose between a Cardinals and Royals game. I’m an equal distance from each and I share the same state with both of them. I’m sure this isn’t he only case either.

I’ll probably think of more later but that is all I got for now.
Posted by AdamE at 1:27 PM 2 comments:

Go check out the contest over at All About Cards.  All you have to do is comment about the worst error for your team you remember.  You can also get extra entries for following on Blogger, Twitter, and Facebook.
Posted by AdamE at 7:29 AM No comments:

I decided to change around my Top 10 Most Wanted List.  Mainly because I have only been sent one card off the thing, ever.  So I changed it to cards that are more likely to be traded away by someone. 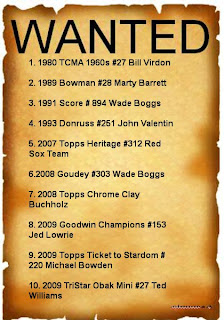 If you have some of these you would trade please contact me.  If you don't have any of these but still want to trade my want list can be found here.
Posted by AdamE at 11:47 AM 6 comments:

There is a contest to give away the contents of a box of 2010 Obak over at DrewsCards.  He has devised a 4 tier contest to enter for 4 different groups of cards.  Go on over to check it out.
Posted by AdamE at 10:11 AM No comments:

Minis From Nachos and Begging for cards

Chris over at Nachos Grande busted a whole case of Ginter and sent me the pictured Red Sox minis.  I love A&G Minis but it is always so hard to track them all down.  I think people hoard mini cards.  I need to get them all before everyone forgets to trade them off.

(One of these came from Cameron but they came the same day and I got them mixed)
If anyone has the following to trade please let me know.
2010 Topps Allen and Ginter Base
36 Victor Martinez
69 Clay Buchholz
157 Kevin Youkilis
239 Mike Cameron

If you don't have any of these to trade my want list can be found here.

Thanks for the minis Chris!
Posted by AdamE at 2:17 PM 1 comment:

Cards From Cameron As His Reds Leave The Cardinals Behind...

Every now and then I get a package of cards that makes me say holy crap.  This was one of those packages.  Why because there was about 600 cards in it.  I don't remember the specifics of the giveaway but Cameron of Reds and More was wanting to purge some cards and I choose to take his Red Sox.  Out of the 600 I needed about 150 of them.  That isn't too bad, I've done way worse at times.  Needless to say I am going to have to find a whole bunch of Reds to send out now.  So lets look at some of the stuff I got.
2009 Bowman Parallels 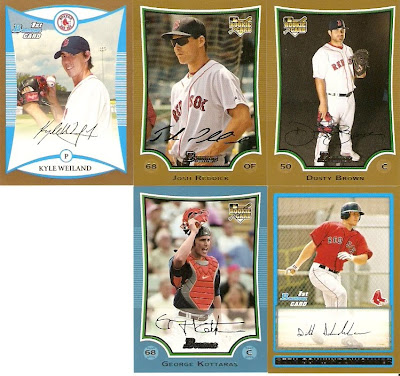 I'm put these in my binder but I'm still not sure exactly what they were.  BP BPP BPW BPPW is just to confusing for me.  What happened to 1, 2, 3, 4....  Even with the odd numbers I really appreciated the parallel cards.
2010 Bowman 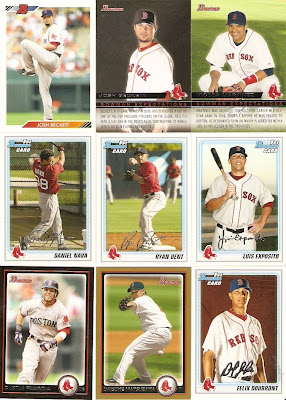 Either Cameron is a prospector or he got sucked into the Strasburg hype machine and bought a whole bunch of 2010 Bowman.  I only scanned the inserts (and Pedrioa) but he sent me almost a complete team set. 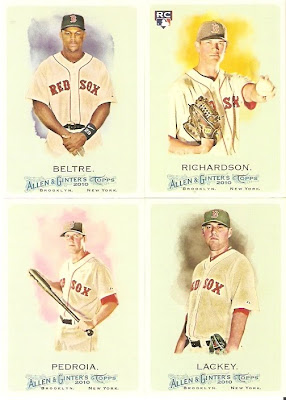 I'm way behind on my base A&G team set.  Someone promised me a whole bunch of them but never followed through so I'm looks like I am going to be chasing these things all year again.
2009 Upper Deck Inserts 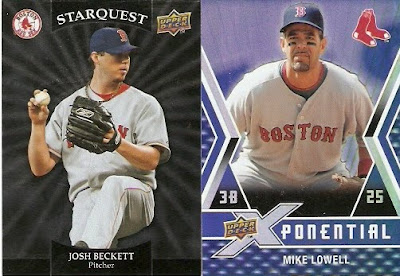 One of the thousand different colored StarQuest Becketts.  This one was Uncommon Blue I think.  Honestly except for the green i can't tell the rest apart.  The other card is a Mike Lowell 2009 UDX Xponential.  I really like this subset and it's one of the few subsets that I chase.
Miscellaneous 2007 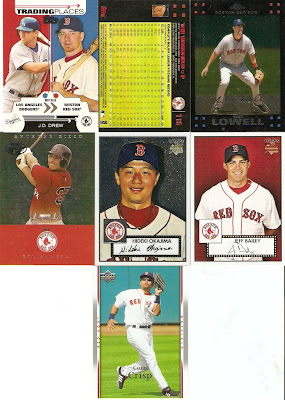 The Chrome Lowell leaves me only one card short of the team set.  The Red Backed Wakefield pushed me over the edge to add these to my checklist and start chasing them.  It wasn't just this Wakefield, Gordon sent me a red Backed Pedroia the day before.  Between the two of them it ended up on my list.  I didn't know there was Topps 52 Chrome but the Okajima in the middle is a serial numbered Chrome card.
2004 Bowman 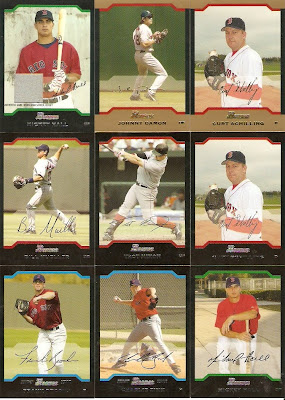 I got a load of 2009, 2010 and now 2004 Bowman from Cameron so I think it is safe to say that Cameron is at least a closet prospector.  The Micky hall is a jersey card.  Oddly it is numbered exactly the same as the regular version.  Does that mean there is a jersey parallel to the whole dang set?  Bowman confuses me. 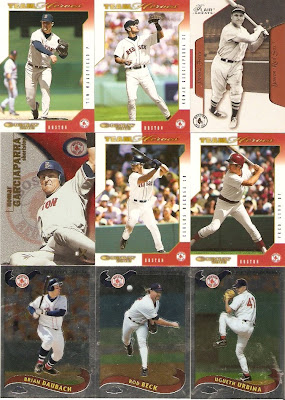 I was never a big Donruss fan so but this looks like it would have been a pretty good set.
Miscellaneous 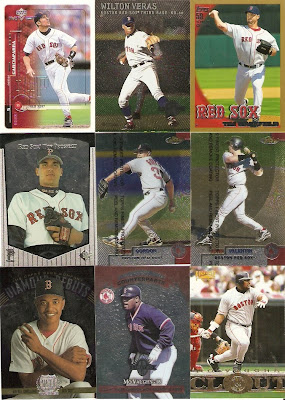 All kinds of stuff here from Gold Parallels to super prospects that got traded away and never have quite lived up to their potential.
Horizontal Cards 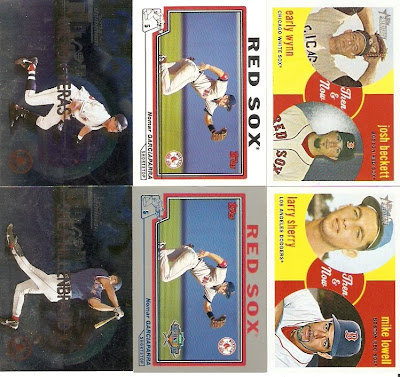 I scanned them but forgot to rotate them and Blogger won't let me so turn your head to the right (or your screen to the left) and enjoy.
Vintage 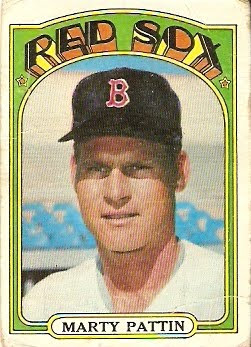 I didn't get just all new stuff.  nestled amongst all the new stuff there was this well used 72 Topps and a few Very VERY WELL USED 75s.
Thanks Cameron for all the cards.  I'm sure I don't have 600 Reds to send you but I will be working on a package to send your way.
Posted by AdamE at 2:17 PM 2 comments: