While I was in Florida I stopped at a card show in the North Port Mall. There was a whooping 2 tables set up. One had nothing but overpriced autographed stuff. But the other guy had a bunch of vintage oddball stuff that was priced good. He also had some awesome vintage boxing cards like 38 Churchman, 48 Leaf, and even T218s from 1910, but I was in the middle of vacation and didn't have enough much cash to spend. The guy had Beckett prices on everything (well almost everything) but was quick to point out as soon as I got there that they were priced at book but it was really just a guideline for him. He didn't price anything even close to what was on the cards and wasn't going by a percentage either. Most everything was priced lower or even with what I could have got it on ebay for.

I picked up card number 1 from Topps Super, Reggie Smith. Does anyone have a good idea on how to store this thing. It is probably think ehoung that nothing can happen to it but I don't want to tempt fate either. 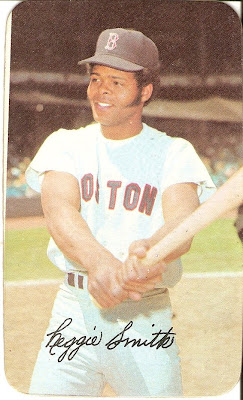 I really like Kellogg's cards and the fact that it is Yaz makes it even better. one day i'll go on ebay and buy every last Kellogg's Red Sox I can find. 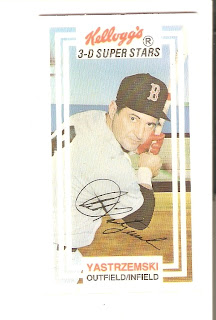 This was the oldest thing I picked up. It is only my second 54 Bowman Red Sox. For some reason everytime I come across them they are redicusally overpriced and I always pass. This one was $3 so I left with it. 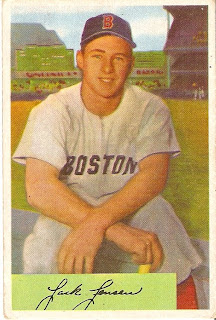 This was a pretty good $1 pickup for an oddball Yaz. I have a complete Footbal set of these if anyone is interested in a trade. It has a bunch of big named stars in it too. 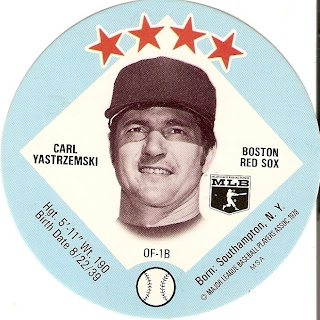 Lastly I picked up a handull of these Topps Stamp cards. Unfourtunaly they didn'thave any Red Sox but they did have a bunch of other teams. A bunch of you bloggers that I have traded with may be getting some of these in the mail real soon. I have a problem though. I got the Luis Tiant Cleveland Indian card below but do not know who to send it to. I have traded with a bunch of Indian collectors so I'm not sure who to send it to. So the first one to comment gets the card. 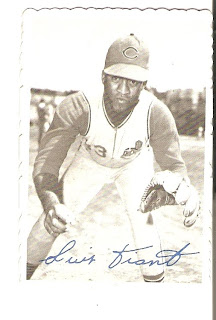 Good pickups. I love those "oddball" tables. I need to find a table like that with Giants stuff

I guess Matt commented first, but I'd take the card if no one else will. My email is gsnhof@gmail.com if you want to set it up.

I'd also take the creased Dick Drago if you don't want it. Great sports names are kind of my thing (I run the great sports name hall of fame) and so I'm always up for adding guys with silly names.

Also, I may have a lot of Sox you might want. I've recently come into some bowman chrome ones, and already have a bunch of other ones too, including a lot of holo nomars. So...yeah just letting you know that too if you'd like some cards or something haha

What is a SpastikMooss?!?! Great name. He deserves it for commenting three times in rapid succession without any of us three that you mentioned getting in a word edgewise!

haha it doesn't matter, you could have it too haha. SpastikMooss was originally Spastic Moose - we made a band when I was in 7th grade that lasted about a month, but the username has stuck forever hahahah. Glad you like it.

whoa..don't know why I appear as David...