I have read a ton of article on Nomar's retirement. There are quite a few schools of thought on it. 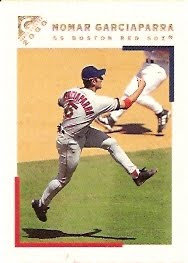 Some people are happy because he was the face of the franchise for a decade. They are happy to see him come home gracefully and hope to see the number 5 in right field some day. Then there are the guys that hate that he retired as a Red Sox. These are the people that remember only when Nomar left the team and blame him for all those missed rings. These guys like to mention Jeter diving into the stands while Nomar sat on the bench. The last group of people thinks his one day contract was an act put on by ESPN to help announce his new job. 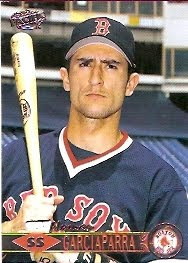 Now which way do you think I remember Nomar, the franchise face or the guy pouting in the dugout? 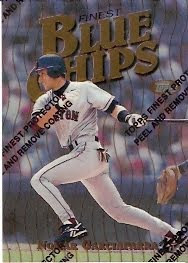 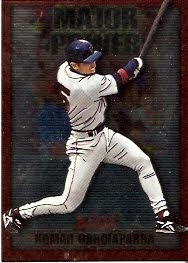 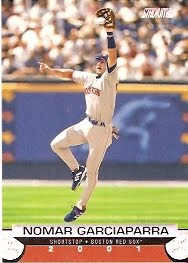 I always saw Nomar as a really good player, nothing more. Emphasis on good but not great. Yeah I know he won two batting titles but that doesn’t make him great in my book. Heck, Mueller won one also this decade and he wasn’t a great player. I also don’t remember him as the quitter in the dugout. Throughout the season every player takes some days off and it isn’t his fault Jeter made a great play that day. I remember him for something else altogether. 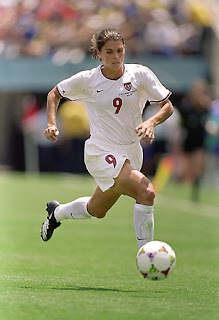 I remember him as the famous husband of Mia Hamm.  Shocked? I know some may be. If you ask who the better athlete was it was defiantly Mia. Is that baseball blasphemy? Maybe but I was a soccer player as a kid not a baseball player. I was always a little kid and almost blind on top of that. I was just physically better equipped to play soccer.


Oh yeah and then there is the fact for most of Nomar’s Boston career I was a single and in my 20s. Whose poster do you think was on my wall Nomar or Mia? 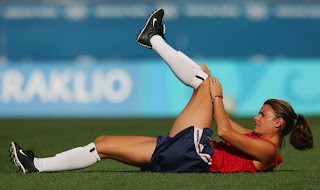 By the way, the first two cards came via trade from Rickey Henderson Collectables.  The other three came from Gordon the Red Sox Collector.  I would write up full trade posts but I am sick of witing them ad I'm sure you all are equally sick of reading them.  That being said I have about 6 of them in que because I have done a ton of trading lately and I really think I need to highlight trades.
Posted by AdamE at 3:05 PM

Play at the Plate said...

I always thought of him the same way....a good, but not great player. I can't believe you had those shots of Hamm and didn't get any comments.