I have found team traders for almost every single team but a Diamondbck collector seemed to elude me.  That is untill I came across  It's like having my own Card Shop.  He was willing to not only take all of my Diamondbacks off my hands but he even was kind enough to give me Red Sox in return.

04 Topps Ellis Burks:  04 is one of those team sets that seem to elude me.  One would think that since they were the team to win it all finallyI would have the team set.  There are so many Red Sox in it though that I never tried to chase them all down. I figured I would just buy a team set but never got around to it.  I like Ellis too.  One of my favorie al time Sox.  Ieven considered becoming an Elis Burks supercollector but figured chasing evert single Red Sox base card was a daunting enough task. 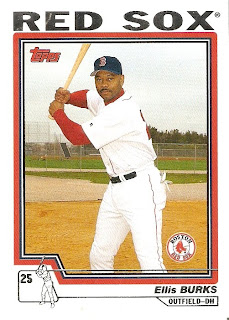 87 Leaf Jim Rice:  87 Leaf are some junk wax era cards I don't have.  I never see them anywhere and nobody sends them to me till now... 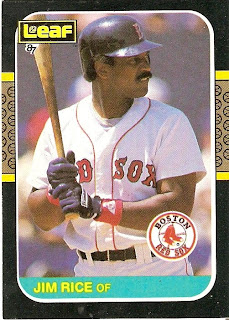 Upper Deck 70s Fred Lynn:  I have seen these on other peoples blogs but nver actually owned one.  Now that I do I really like them.  I like how the colors are so far out; they really mak the pictures pop, although Fred looks like he is asleep at the plate on this card. 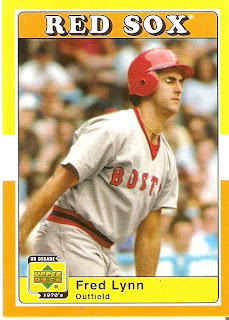 08 Sweet Spot Dice-K:  In a trade is definatly the only way I would ever receive some one of these.  I can't force myself to pay $20 for one pack when I can hit SportsLots and get 100 cards of my chosing for the same price. 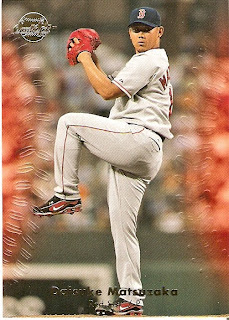 08 Upper Deck Documentary Kevin Youkilis:  My first Documentary card and it is of my favorite player.  I actually like the card design.  A team set of 162 cards is pretty daunting though so I don't ever see myself trying to chase the whole thing down.  Hopefully I can pick up lots of them in trades though.  (I haven't been able to get a checklist for it either.  I tried to copy it off if UDs site and paste it to excel so I could sort it by team but there are so many cards in the set it errors out before finishing)  (Upper Deck - If by chance you read this please make your checklists download to Excel.  Who wants a paper copy of a checklist in this day and age.  It is so much faster and easier to keep digitally.)
editors note:  I finally got the checklist downloaded and am now contemplating the team set.  Only 160 more cards to go... 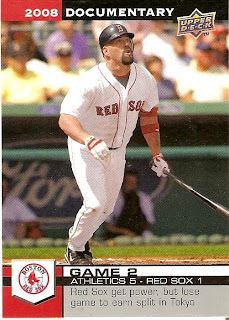 Thanks for all the awesome cards.
Posted by AdamE at 7:00 AM

Adam, check my web site, I have some UD Documentary to trade.

Give that fan a contract! said...

Glad you liked the cards! The D-backs card you sent were great! Looking forward to more trades in the future.