The only blogger that I have meet in person (so far) is a guy that goes by Rhubarb Runner.  We meet at a card show in St Louis and he loaded me up with a bunch of vintage Red Sox.  He continuously finds me stuff that I need and sends them to me.  I owe him dearly.
First off from this shipment is a bunch of Documentary Red Sox.  It seems that he has a thing for this set and found a bunch of Red Sox I needed.  It is hard to tell from the scan but the two at the bottom are Gold parallels.  I didn't even know the set had a gold parallel until he mentioned it.  I don't really plan on tracking all the gold Red Sox down.  I'm having enough problems with the 162 regular ones.  This put a good sized dent in the want list though. 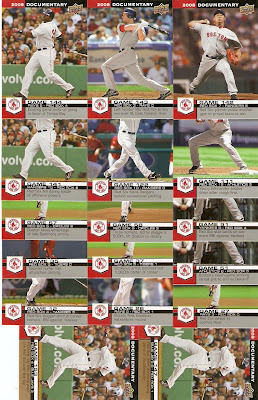 2009 Topps Gold  These are the Update and Highlights variety.  The last package I got from him was also loaded with gold cards.  He must be a luckier pack ripper than me cause of the few packs I open they never have gold cards in them. 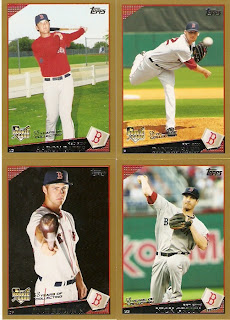 At first I told him i had this card because it was not on my checklist.  It bugged me though cause I didn't remember it.  Once I went to the actual cards I figured out that when I got Pedro I accidentally marked Nomar off the list instead.  That is okay now because now they are both off the list.  This card is crazy think.  Think one of those dummy cards that companies throw in times two.  I had to stretch a vintage penny sleeve to fit it in there.  I'm not quite sure what is so classic about the portrait though.  Looks like a BP picture to me.  With the crazy thick cards these would have looked awesome if they had been painted versions of pictures like Masterpieces, Diamond Kings, or Gallery. 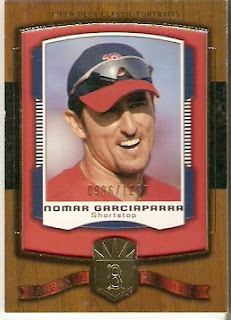 Thanks again Rhubarb.  I'm still looking for that 61 Twins Team card for you...
Posted by AdamE at 8:59 AM

I am definitely NOT a lucky pack ripper! The local card shop ripped a lot of Update, and he sells me these at a really reasonable price, so...no problem!

As far as my irrational love of the UD Documentary, they're also nice to send to others, because chances are really good that they don't have them already. ;-)

btw, notice how the Documentary writeups on the card front NEVER mention a player's name? They don't want any confusion between someone named in the writeup and the completely random guy pictured!