No this isn't a post about what I dug out of a Dime Box this is a post about the cards I got in the mail from Baseball Dime Box.  Nick has the very best new blog out there.  Give him a read because if you are not checking out Dime Boxes you are rally missing out. Not only is it the best new blog it is one of the best blogs period.  My daily blog reading goes Night Owl, Dime boxes then everybody else.

First off it a Target parallel of Josh Beckett.  As I'm writing this there is speculation that he might get traded.  I'm going to guess he doesn't go anywhere and throws a bunch of great games this year.  I think the media just doesn't like him cause he doesn't give interviews after games so they make sure only negative reports come out.  Very unfair but that's the world we live in. 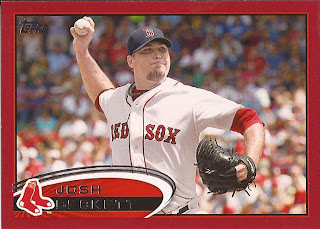 Speaking of unfair if Nick found this is a dime box that isn't fair.  This isn't the normal base Pedroia from this year's Gypsy Queen this is the alternate SP version.  This almost finishes of the team set for me.  I'm going to have to do a COMC search unless this post gets me a trade partner for the other SPs. 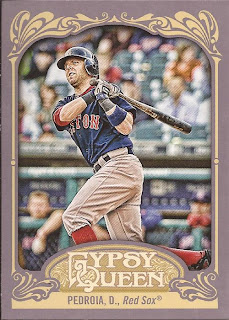 This is one really cool card that didn't scan well.  It is one crazy colorful card of baseball great Nomar Garciaparra.  It seems weird typing baseball great instead of Red Sox great since for years he was the face of the team.  (Just so you know it says Soul of the Game) 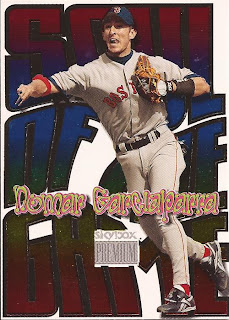 Nick has a better eye than me and he mist know it because he wrote a note on the penny sleeve of this card.  It is a good thing he put the Glossy not on it too because I would have banished it to the doubles box for all time if he didn't.  It makes me wonder if I already have some Glossy cards in the double box.  Not wonder enough to actually check but wonder just the same. 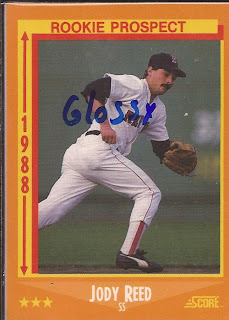 Lastly is an Opening Day Blue Papi.  There were a couple of these Blue cards in here and when I went to mark them off my wantlist they were not there.  When I saw them I automatically thought they were Series 1 Wal Mart cards but the numbers didn't match up.  It wasn't till I was trying to figure out why the numbers didn't match up when I noticed the serial numbers on the back.  Now I knew that Wal Mart cards didn't have serial numbers so I knew something was up.  That is when I realized that they were Opening Day Blue cards.  Oddly enough I have as many Blue Parallels as I have regular base cards. 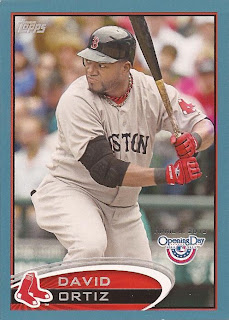 Thanks for the great trade Nick.

I really have no time to consult my dupes box today.

Thanks for the kind words on my blog and glad you liked the cards!

The Pedroia actually came from a pack. I was originally going to keep it, but I figured it would be far better in your hands than mine.

Also, Score glossy cards already had the penny sleeves with "Glossy" written on them when I pulled them from the dime box. I just kept it in the sleeve when I sent it to you for the exact same reason you mentioned. If I didn't know they were glossy, the couple "keeper" ones I bought probably would've been in my doubles box by now as well.

Again, glad you liked the cards!