It isn't very often I write a post but one good way to get a post out of me is to have a contest and let me win and that is exactly what Brad did.  Brad is the proprietor of the appropriately named Brad's Blog and I am getting used to thanking him because he is the very same guy who helped me out with the Virdon 1/1 card not long ago.  Here was my contest winnings. 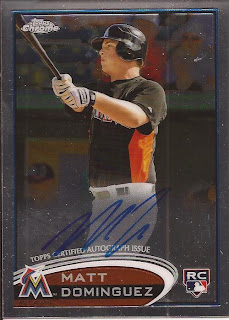 First up is a Marlins auto.  I have no idea who Matt Dominguez is. A quick Wicki search says he was traded to Houston in the Carlos Lee deal.   Not so long ago I would have shot Wicked an email and asked him if he needed this.  Now I don't know what to do with it.  Maybe Dimwit will want it, I owe him anyway. 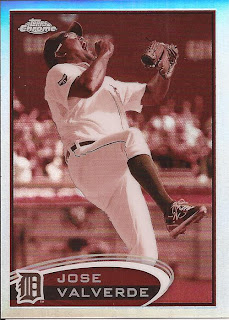 Bad scan, bad, bad, scan.  Other than that, what you need to know about this card is that it is a refractor and it is numbered to 75.  I have a destination in mind for this card already.  I have some boxing cards that need to be sent north, this will make a good addition to that package.  (By the way, Dennis if you are reading this your not going to get your package until mid January or so.  I'm not fighting the lines at the PO before Christmas and I'm out of town afterwards. Sorry about that) 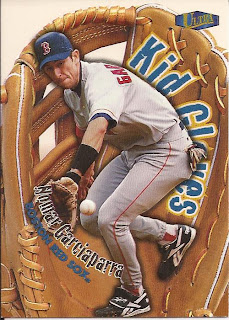 Not long ago I wrote many many posts about how nobody ever sends me Nomar cards. It was nothing to get 100 early 2000s Red Sox in the mail and not a single one of them be Nomar.  I guess he has been retired long enough now that people are no longer hording his cards because I have got quite a few this year. I didn't scan them but Daniel sent me a bunch with the micro cards I posted yesterday.  Brad sent me this cool insert from one of the many years of Ultra. 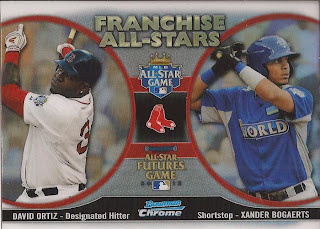 The very first Bowman Chrome card I received this year happens to be an insert.  Big Papi with the SS heir apparent Xander Bogarts.   It is supposed to commemorate Ortiz as a major league all star and Bogarts as a miner league all star but that isn't what I see.  I see card with a guy with Z and a guy with a X in his name on the same card.  I don't know every card ever made but I kind of doubt there are many Z/X combo cards out there. 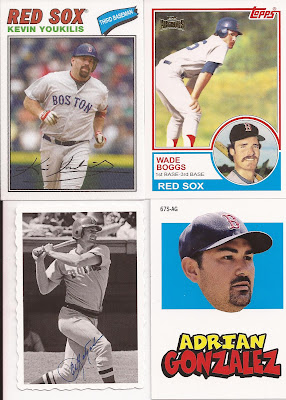 Lastly Brad sent a bunch of Archive Red Sox stuff.  I thought that Archives was just Ehhh but the inserts are great.  The 77 Cloth Design, 67 Sticker Design, and the 69 Deckle Edge are all solid inserts that I like alot.  The Boggs reprint is pretty lazy but I don't expect to like everything Topps makes.I'm pretty close to having all the different Archives Red Sox inserts now.  I only need the following to have them all:

There are not many sets out there that I have the whole team set and every single team insert too.  With a little help I may be able to knock them all off.

Once again, Thanks Brad.
Posted by AdamE at 7:30 AM

Glad you liked the cards!